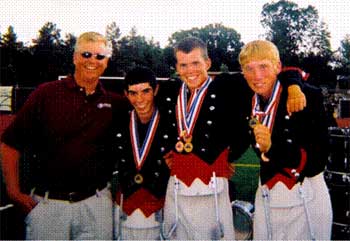 Chris Jack, a native of Salem, N.H., submitted this shot. "This is the Spartans tenor line from 2004. This picture was taken at DCI Division II & III Finals in Denver about five minutes after retreat. "From Left to Right: Our tenor tech Mike "Wuzzy" Wasielewski, Mark DeLacy, me, and Evan Girouard. "I have had some truly great seasons with Spartans since I began marching with them in 2001. From winning high percussion in 2003 to finally winning a championship last year, 2004 was special because I got to march between two of the coolest guys I've ever met.

"2005 is the 50th anniversary for the corps and once again I will be marching with Mark and Evan in the tenor line. "It should be another monster season here in New Hampshire!" Thanks Chris!
E-mail your Forzato submissions -- and we will get to them all, in time (and we're posting them in the order they were received) -- to dave@dci.org along with where and when the photo was taken. Send some biographical information about yourself as well. We'll give you full credit. Also, let us know if you want your e-mail address included.