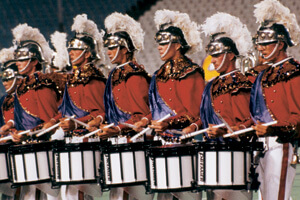 1991
The name Star of Indiana evokes an image of legend in the minds of many drum corps fans today. This corps, who took the field from 1985-1993, accomplished much in its relatively short existence, making the World Championship Finals in its very first year and winning a Championship in 1991. With groundbreaking programming that many considered ahead of its time, Star of Indiana is a major influence on the drum corps activity as we know it today. 2010 marks the 25th anniversary of the Star of Indiana organization. With the return of the DCI World Championships to Indianapolis, alumni decided to take matters into their own hands and form the Star Alumni, which will perform during World Championship Semifinals, Friday Aug. 13 at Lucas Oil Stadium. "We have a full field production, so it's going to be more than the corps moving and playing music," said Star Alumni Project Manager Amber Sears. "There's an audio-visual portion, we have props, it's a full scale production. And we will be playing excerpts from all of the corps' competitive years, from 1985 all the way through 1993." To help fill the ranks of the corps, Sears said Star Alumni draws from members from the original Star of Indiana drum corps, as well as other Star performing groups like Brass Theater, Blast! and ShockWave. They've also included what Sears calls "second-generation alumni" who were taught by former Star brass caption head Donnie VanDoren. 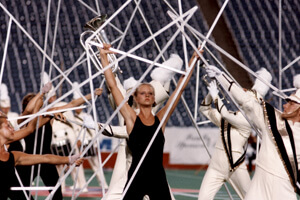 1993
It's no major shock that alumni members grow increasingly excited as the performance draws nearer, not just because of the opportunity to perform as part of the DCI World Championships again, but because of the memories and family bonds that are rekindled. "Between spring and summer, people have really, really gotten excited," Sears said. "Your whole life starts revolving around drum corps again, and then you feel like you are 20-ish again — and just that excitement of being on tour and being in an activity that you love with the people who are your family. I mean, some of these folks have known each other for 25 years and more, so getting together and creating that again, is exciting beyond words. "It's bringing the Star of Indiana back to DCI now, and reintroducing ourselves to a new fan base. Only the hardcore drum corps guys are going to know who Star of Indiana is, or was, or saw it at that time. The young kids and the folks who are marching now, to them, we may be just a mystery. So it's really exciting to be able to show people what we were about." Purchase tickets to the World Championship Semifinals. View a complete schedule of 2010 World Championship events. Contributing to this report: Kayla Murphy