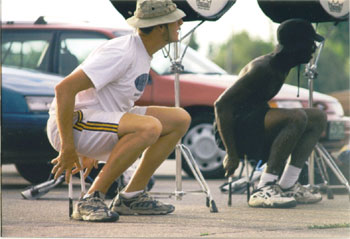 "My name is Greg Battin. I am from Denver and I marched Blue Knights in 1996. My favorite part of the drum corps season is not only when all the corps come into town -- it is going to watch the corps do the thing that they do the most, REHEARSE. Even at the corps shows I always want to be in the lot watching. I feel that the real show is always in the lot, and the way the corps rehearses that day leading up to the show and how they do in the lot will set the mood and will affect the outcome of that night's performance. "I would much rather take pictures of corps at their most comfortable and vulnerable stages -- at rehearsal, in their shorts and stinky T-shirts and baseball caps, with dot-books flung around their bodies, and the looks of monotony on their faces from running the same chunk of drill 30 times and no hope of moving on before lunch. "My favorite picture in this bunch that I sent you is the one where the basses are sitting on their mallets. I like it because it shows a little more humanity and shows that side that not a lot of people get to see. I took these pictures when the Blue Devils came through Denver in 1999 and they stayed at a high school a couple of miles away." Thanks Greg! E-mail your Forzato submissions -- and we will get to them all, in time -- to dave@dci.org along with where and when the photo was taken. Send some biographical information about yourself as well. We'll give you full credit. Also, let us know if you want your e-mail address included, to get feedback from other drum corps fans.