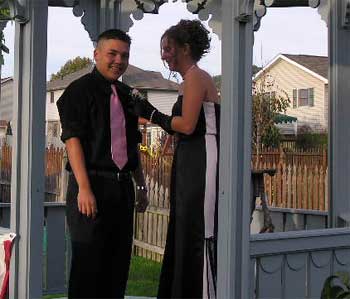 Leanna Rummes of the 2004 Kiwanis Kavaliers sent in this one. "It was my first season in a drum corps, and I met a lot of new people. Everyone at Kiwanis was a blast. I keep in touch with a lot of my really good friends from tour. The person who stands out the most to me out of all the people I met on tour, was a very charming boy, Walter Cevallos. I was on the guard, and he was on trumpet. It's an amazing relationship, and we're still going strong. It's a hard, long-distance relationship, but we're doing great. He lives in Orlando, Fla., and I live in New Philadelphia, Ohio. It's an awfully far distance, and we talk every day either on our cell phones, or via instant messenger. Luckily, our cell phones have the same provider, so our bills aren't out-of-the-roof. Hehe. "My mom met him on tour, first in Toledo, and then again in Indianapolis. She is so happy that I met someone so nice on tour! It's been four months since Denver finals, and the day we went our separate ways, and we're still going strong! I'm still in high school, so I invited him to my homecoming. He flew up that weekend, and stayed here with my family. It was nice to be together in a non-tour atmosphere! "He was a charming date. I might be going down to see him soon. I'm saving up money for it (not to mention saving for tour fees). He enjoyed meeting all my friends here from Ohio, and seeing some of the people he knew that I went to Kiwanis with. Unfortunately he had to leave on Sunday, because he had classes the next day. "I'd like to say "Thank you DCI" for bringing such wonderful people together and giving us all the best memories anyone could ask for!"

Thanks Leanna!
E-mail your Forzato submissions -- and we will get to them all, in time (and we're posting them in the order they were received) -- to dave@dci.org along with where and when the photo was taken. Send some biographical information about yourself as well. We'll give you full credit. Also, let us know if you want your e-mail address included.