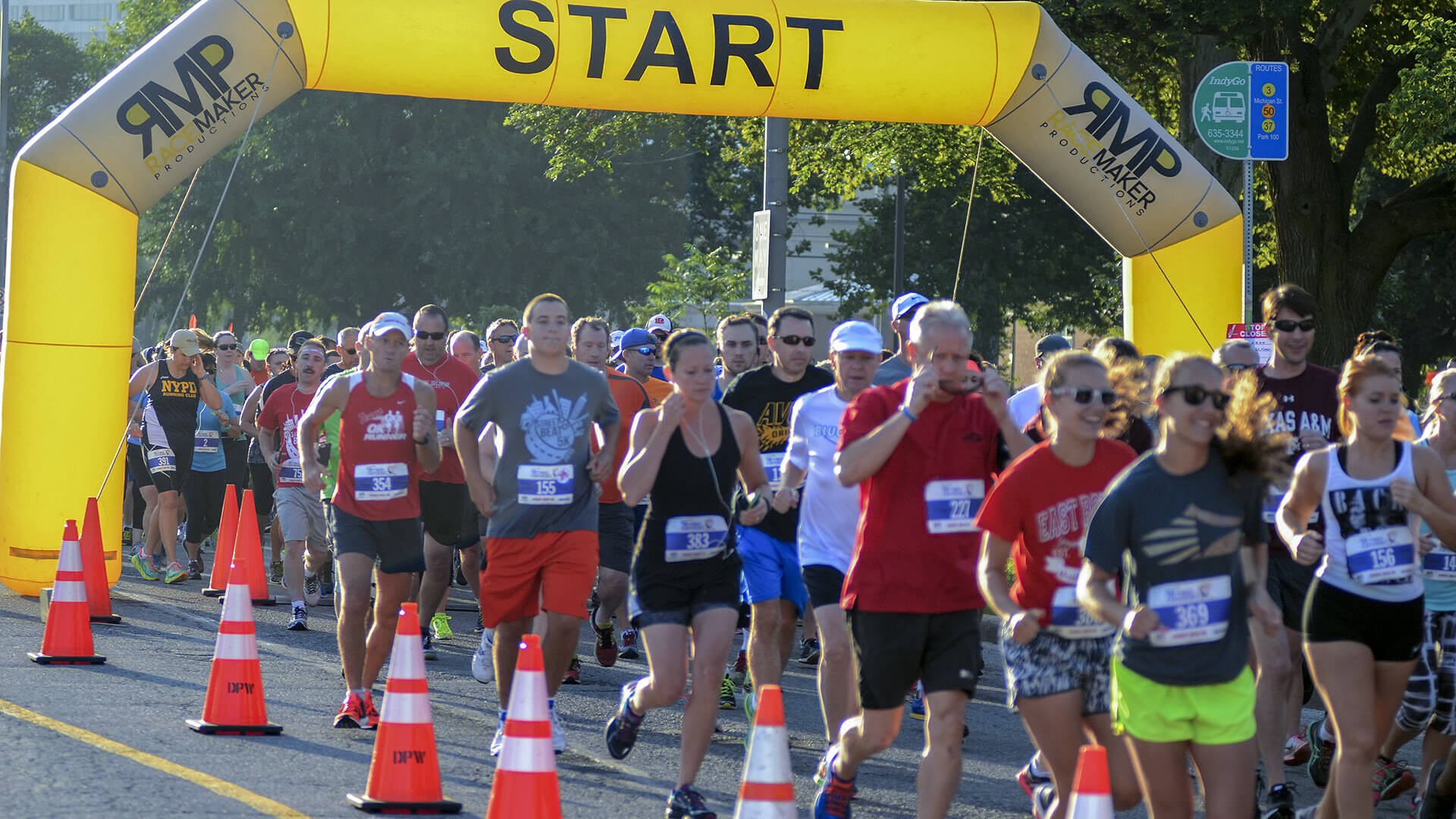 Runners take off from the starting line of the 2015 Street Beat 5K in downtown Indianapolis.Photo by: Drum Corps International

While drum corps race to the finish line of the DCI World Championship Finals, their fans can run their own race to assist their favorite corps or other music organization.The Street Beat 5K run/walk will draw its starting line on Saturday, August 13 at 8 a.m. ET in downtown Indianapolis for the third consecutive year. The event is sponsored by Drum Corps International, Inspire Arts & Music, and Jonnie’s Goodguys to raise money in support of music programs everywhere.Participants of all ages have the opportunity to use the event to help maintain a healthy lifestyle as well as donate a portion of the registration fee to any drum corps, marching band, choir, concert band, or other music program of their choosing. “We welcome anyone who wants to walk, run, or jazz run their way through Indy to Lucas Oil Stadium,” said David Stauffer who serves as an Inspire Arts board member and organizer of the Street Beat 5K. “Our goal is more than 1,000 runners. However, our real goal is to continue to provide a vehicle for arts and music programs to raise money without having to invest much of their time or energy fundraising when they should be focused on performing.” 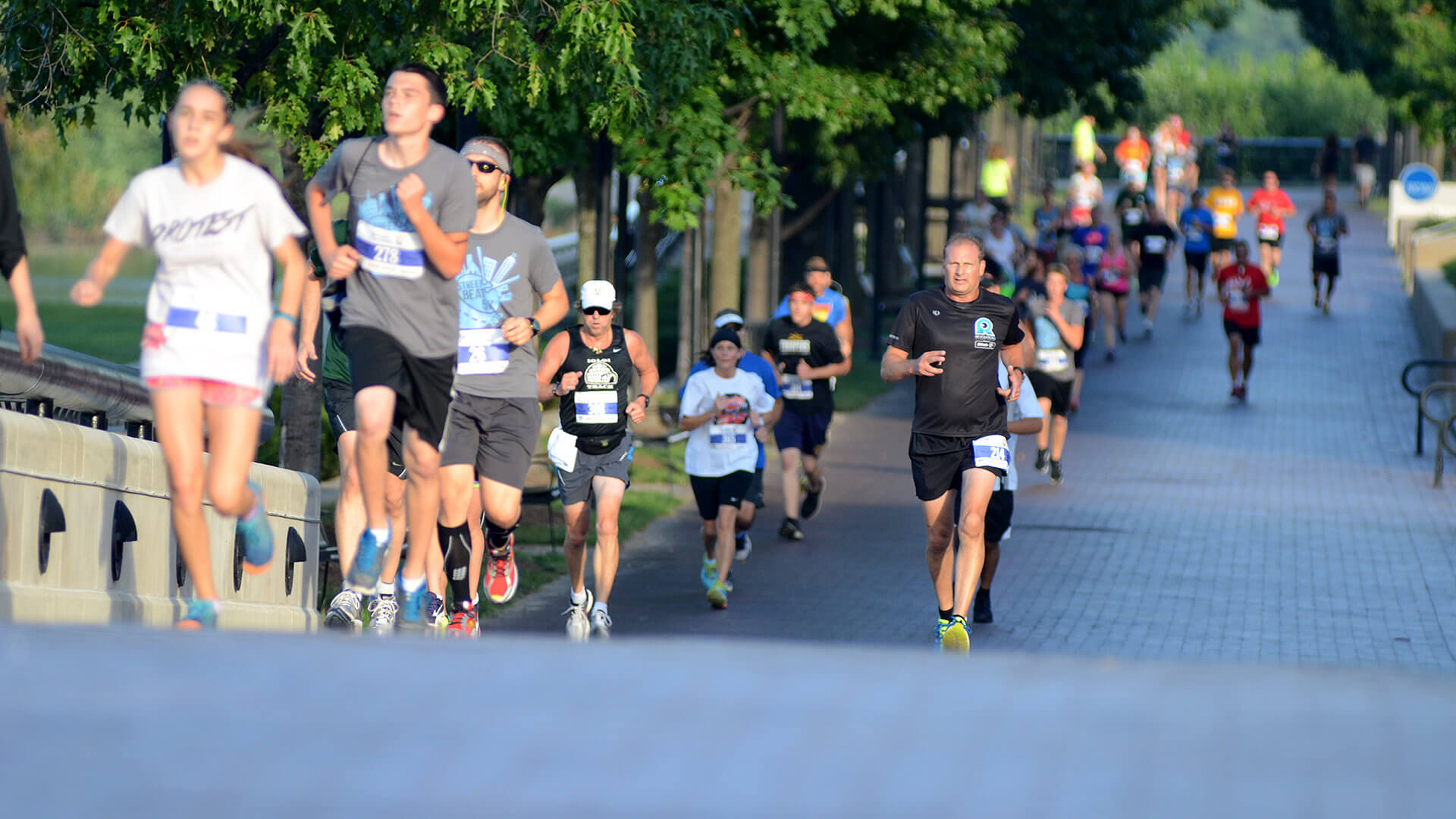 Runners/walkers will complete a route from Military Park to Lucas Oil Stadium in downtown Indy.

Fifty percent of the race registration fee goes directly toward the organization of the runner’s choice, with the rest going to underwrite the costs of the event itself. Nearly $7,000 was donated to 56 different music programs following last year’s event. Much of the behind-the scenes work comes from several small businesses in the Indianapolis area, but leading the event-day operations is Jonnie’s Goodguys, a non-profit organization that typically focuses on running races.Founded in memory of Jonathan (Jonnie) Miller, a Star of Indiana alumnus who passed away in 2005 from an undiagnosed aortic aneurism, Jonnie’s Goodguys helps raise awareness about lesser-known “genetic syndromes” through its presence at race events. Its collaboration with the Street Beat is something president Andi Solero said the organization’s board has personal connections to.“We focus on events that are heart health or aortic disease related, and because [our board members] met during drum corps, music is a huge part of our lives and what brought us all together,” Solero said. “This is just a way to tie in our new passion of running with our old passion of drum corps.” 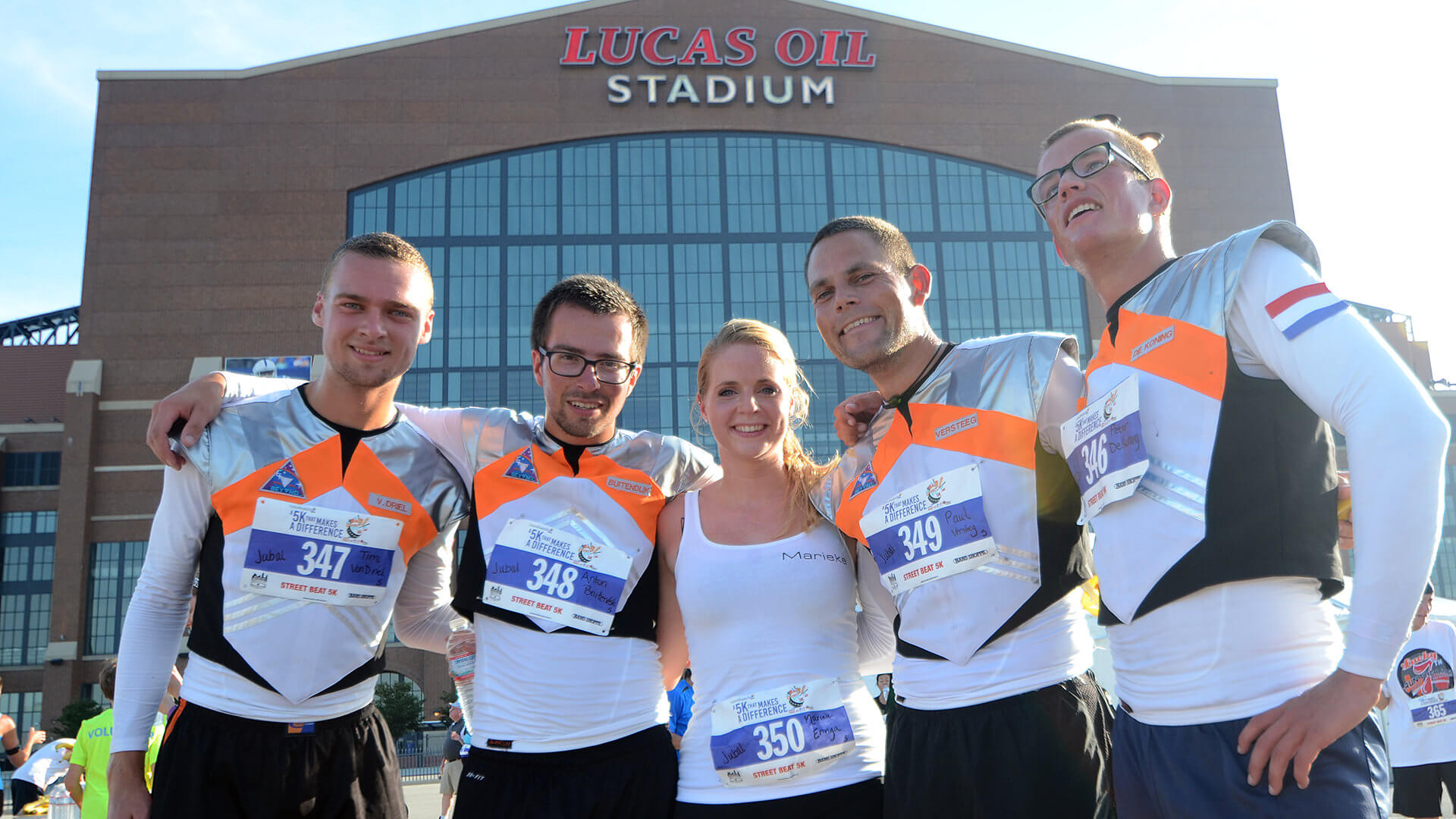 Members of the Netherlands-based drum corps Jubal had the opportunity to run the 2015 Street Beat 5K.

Utilizing 10 years of race knowledge to make sure everything at the 2016 Street Beat goes off without a hitch, Jonnie’s Goodguys will also take the opportunity to hand out literature on heart health and recipes from the American Heart Association on-site. Stauffer said efforts of the organization also help to foster and promote DCI’s Marching Music Health and Wellness initiative. His main focus is to give recognition to how hard each corps works physically, while giving each a financial boost to continue its positive engagement of healthy living through the arts.“We know how incredibly demanding it is to rehearse 10 hours a day and then perform with exceptional musicality while running all over a football field,” he said. “When you see cans collecting change at souvenir stands to help put gas in the tank so [drum corps] can move from one show to the next, you know there is a need. We need your help to mobilize the fans who love this activity.”In 2015, approximately 420 participants representing 33 states as well as Canada and other European countries traced the path from Military Park to Lucas Oil Stadium, and goals this year aim to double that number. Registration for the Street Beat 5K can be done online, and is open until the event begins at 8 a.m. ET on Saturday, August 13. The race fee is $35 or $40 if registered after July 31.
Learn more about the Street Beat 5K and register today.