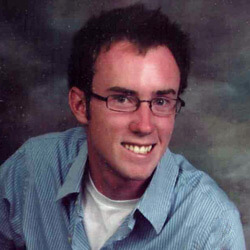 Ryland Schell
Ryland Schell, 20 California State University, Northridge (CSUN) Mystikal Snare Line, 2005; Pacific Crest Snare Line, 2006-2009 How did you choose your corps? I wanted to make the leap to a high level of competitiveness, discipline, responsibility and gain an overall "family" feeling from my drum corps experience. Pacific Crest pushed me to that level. In your experience, what's the best way to prepare for an audition? I think the best advice I have is from my dad. He would always tell me, "The word 'can't' does not exist." Meaning that if you say that you can't do something, you are not ready for what you are attempting. Earning a spot in a corps not only takes responsibility and maturity in your abilities, you also have to desire to be a part of the corps. Yes you will be pushed, but you can do it. Strive for excellence. The best way for me to prepare is to not lose focus on myself. To be blunt, auditions for a drum corps are not easy, especially when auditioning for a few spots in the snare line. I was always focusing on myself, but at the end of the day, I had made the effort to meet everyone and had the opportunity to drum with everyone. That way I knew the level I had to work toward before the next audition weekend. What can a prospective corps member expect when he/she shows up for an audition weekend? While I was auditioning, I was always confronted with anxiety and nerves just from being there. But those involved with Pacific Crest have a tendency to make you feel at home by introducing themselves and by joking around with you. I have never known the corps to ignore someone, nor to put down a prospective member. Though we may be veterans of the corps, we still audition too, and we like to see new faces come out every year. Be prepared to have a great time with fellow musicians like yourself … it's addicting. The first time you auditioned, was the process different from what you expected it to be? I was expecting a high standard and a lot of "in your face" instruction while drumming. The audition process, though, is an educational experience, and instructors work to teach members new skills while seeing how far they can be pushed to achieve. Part of the audition process is centered around what a normal day would be like while the corps is on tour in the summer. Essentially your audition is both how well you perform in practice and how well you can handle yourself while away from the drum. Were you nervous at your audition? I was very nervous; however, knowing that I had been practicing and training hard for that weekend, I was confident in my abilities. Regardless of making the cut or being cut from a spot with the corps, I was proud of my achievements. Being proactive in practicing and being serious about wanting to be in the section made me less nervous. One way to get over your nervousness is to perform the audition material in front of family and friends. You never know how nervous you will be in front of people until you actually do it. My dad was a part of the 1981 Cavaliers battery percussion section, so playing for him worked out really well for me. I suggest asking your band director or fellow musicians to listen to you play and have them combine their thoughts and suggestions for you. It can work for the best! What do you think is most important for someone to take away from the audition experience? Professionalism. Whenever I have auditioned I always come back to school or work and have more confidence in front of other people, a feeling of responsibility to get things done on time, and I am a better team player and leader. All these things add up to change you for the better. Any other advice? No matter where you audition or whether or not you make it into that corps, always shoot for excellence. Whether you're trying out for a World Champion corps or a lower placing group, your intensity and determination in the audition should be the same. Any experience with a drum corps can be valuable. Never think of your experience with one corps as a stepping stone to another. Always put the same amount of intensity into your efforts regardless of whether or not you're trying out for or performing with your "dream corps." Learn more about corps audition dates, locations and additional info.