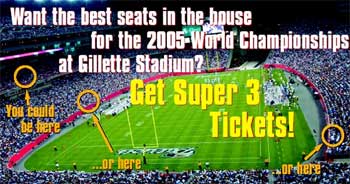 1) Join Friends of DCI at the Bronze level and above As a Friend of DCI you get: Priority access to the best seats in the
house for the DCI World Championships and Major Events, a first-class subscription to DCI Today and other cool stuff, and your contribution helps to support Drum Corps International and the corps who participate in the Summer Music Games Tour.

Can't be in Denver? You can still order your 2005 World Championship Tickets. Order early for the best selection.

Quarterfinals and Semifinals events will be performed to the visitor side of Gillette Stadium. Location and views will be comparable to the World Championship Finals seating on the home side.
All sales are final. No refunds or exchanges.