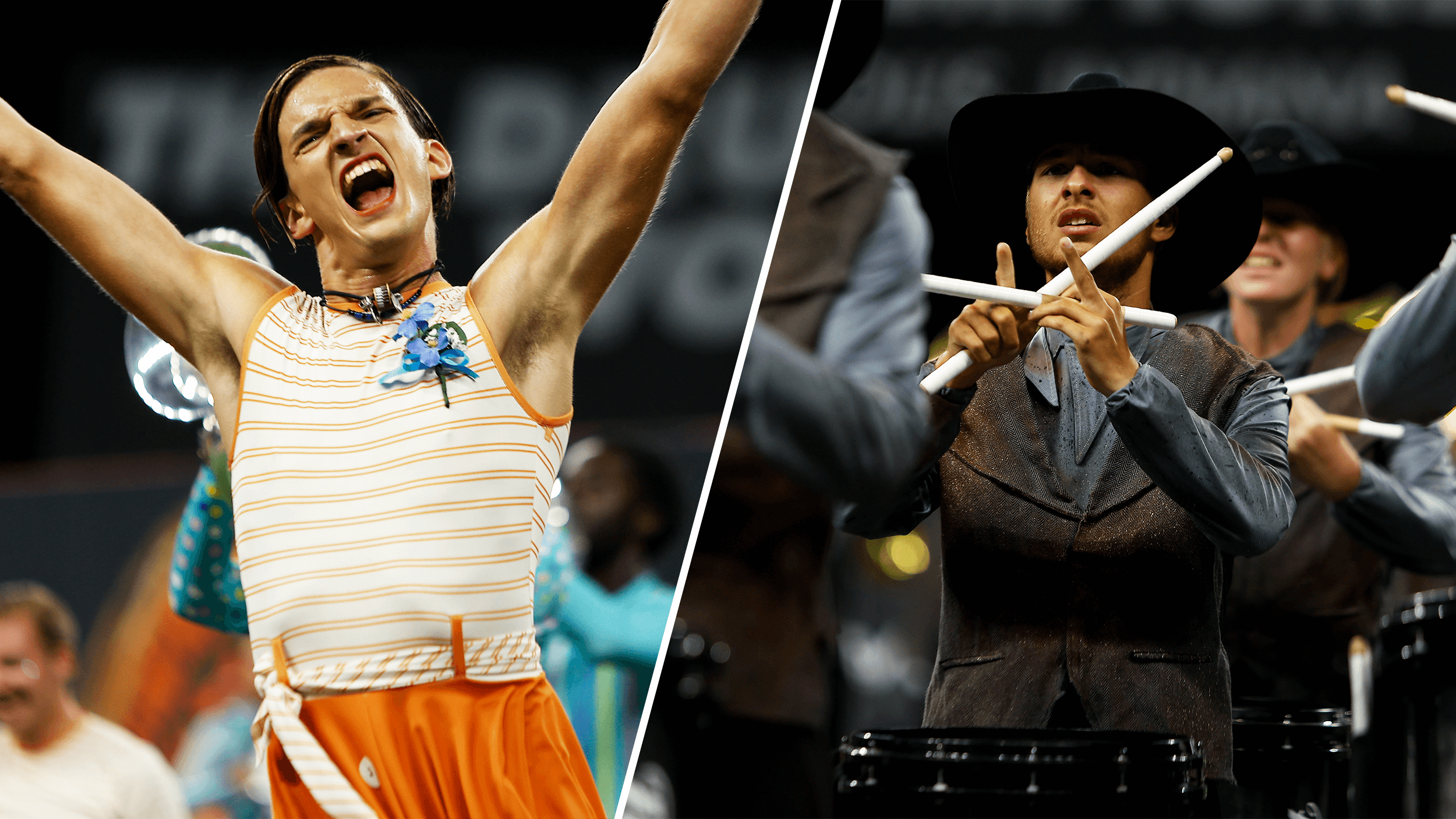 Jersey Surf and Troopers both made competitive waves in Thursday's Prelims event.Photo by: Drum Corps International

One of the most noteworthy of those, Jersey Surf earned the final spot amongst the Top 25 to advance to Friday’s DCI World Championship Semifinals, marking its second-consecutive appearance at the annual Friday event.

“We’ve worked through a series of challenges this season after two years of inactivity due to COVID,” Jersey Surf assistant corps director Stephanie Dutcher said. “We are thrilled for our members who have worked extremely hard the past week to share their love of performance with the world.”

Troopers also posted a late scoring surge, moving from the corps’ pre-show seeding of 14th place to a 12th-place finish at Thursday’s event, positioning the corps to vie for its first finalist berth since 2009 and second in the past 30 years.

Blue Devils took top marks at Thursday’s event, earning a lead of 0.95 points over the field while winning all captions except color guard and visual proficiency.

“The whole season, we’ve had a good amount of energy,” Blue Devils drum major Corey Castillo said. “So, this week has been about trying to find that quiet cool, that quiet focus, to really dial in little details, but our performance energy has always been there.”

Boston Crusaders remained within a point of Blue Devils, largely due to strong scores in visual captions; the Boston corps finished just one tenth of a point behind its Bay Area-based opponent in total visual.

Bluecoats made moves amongst the top three, sliding ahead of Carolina Crown in the rankings from the two corps’ most recent head-to-head meeting. The Canton corps earned top marks in visual proficiency and outscored Crown in general effect and visual, while the South Carolina corps held advantages over Bluecoats in music.

Santa Clara Vanguard rounded out the Top 5 while finishing as high as third in the percussion caption. The Santa Clara corps kept The Cadets at bay with an advantage over 1.5 points.

The Cadets — which led Blue Stars by just 0.425 points August 6 in Allentown, Pennsylvania — kept their stronghold on sixth position with Thursday’s output.

The Cavaliers made up significant ground on Blue Stars Thursday. The two were separated by 1.2 when they last met August 6 in Allentown; just 0.237 stood between them in Indianapolis. While The Cavaliers held a lead in both total music and total visual, Blue Stars’ general effect scores kept the Wisconsin corps’ lead intact.

Phantom Regiment and Mandarins — two corps that have remained in a close race for the latter portion of the summer — were separated by 0.55, with Regiment regaining a head-to-head lead over its Sacramento, California opponent. The Rockford, Illinois corps’ strong suit came in general effect, while Mandarins had an edge in music captions.

Colts continues its competitive tear through the 2022 DCI Tour, scoring five placements and more than three points ahead of its 2019 Prelims output. The Iowa corps held off the surging Troopers by a little more than half a point, with advantages in the general effect and visual scoring captions.

Troopers outscored both Crossmen and Blue Knights for the first time this season, moving into the 12th position entering the summer’s second-to-last event. The Casper corps posted standout music scores, including a ninth-place finish in percussion.

Crossmen, however, was within a razor-thin margin of Troopers for the final spot among Thursday’s Top 12, with just 0.05 points separating the two corps. Crossmen outscored Troopers in total visual. Blue Knights remained close, scoring 1.4 points behind the San Antonio corps.

Madison Scouts kept a solid advantage over The Academy; the two had been separated by 0.75 at their last meeting, July 30 in Atlanta, Georgia. The Madison corps opened up a stronger lead Thursday; its substantial advantage in music and visual captions made up for a slight deficit in general effect.

“Tonight was a really good performance,” Madison Scouts horn sergeant Ethan Hacker said. “Probably felt like our strongest one, I think. It’s always good to be back in Lucas Oil; lots of good energy tonight.”

The Academy and Music City, who spent the last two weeks of the season in a close competitive race, finished within just 0.775 of one another. While The Academy has outscored Music City in all five of the two corps’ head-to-head meetings this summer, each of their five meetings have been decided by a margin slimmer than one point.

Genesis and Pacific Crest rounded out the Top 20, separated by just one tenth of a point in one of the closest finishes of the day. While Pacific Crest outscored Genesis in total visual by a strong margin, Genesis’ stout music scores made the difference; the two tied in general effect.

Gold — fresh off of winning an Open Class silver medal Tuesday night — scored less than half a point outside the Top 20. In a third airtight finish in as many meetings this week with Blue Devils B, Gold fended off the Concord corps by just 0.45 points, led by strong scores in music captions.

“(Today’s performance) felt awesome,” Gold drum major Karlin Weisinger said. “It’s so amazing to be back here in Lucas Oil Stadium; it’s really one of the best places to perform. That was an awesome run, I think we were all enjoying the stadium and enjoying being here today.”

Guardians earned its first-ever Semifinals bid with a strong score of 76.213. The Texas corps’ placement, 24th, is an improvement of five spots from its 2019 output, and its score is an increase of nearly six points from 2019’s Prelims event.

Jersey Surf earned its Top 25 position largely due to strong scores in visual captions. The New Jersey corps scored as high as 24th in visual proficiency.

In its debut appearance at the DCI World Championships — also marking the first Utah-based corps to appear at the season-ending event — The Battalion had an impressive competitive output, finishing among the Top 30 and scoring just over a point and a half away from the Top 25 Semifinalist cutoff.

The Battalion had scored behind Southwind at Monday and Tuesday’s Open Class World Championship events, but moved ahead thanks in large part to strong scores in music captions. Southwind and Legends weren’t far behind the Utah corps, though — just 0.188 separated the three corps.

The Louisiana corps’ slight leads in music and general effect captions made up for its slight disadvantage in visual captions. River City Rhythm scored as high as 27th in percussion.

Les Stentors earned the corps’ highest World Championship Prelims placement ever; its previous best finish had been 34th, earned most recently in 2019. The Canadian corps scored in 28th place in the color guard caption. 7th Regiment, which was assessed a two-point penalty, finished 30th in General Effect 1.

Raiders and Colt Cadets rounded out the Prelims lineup in 34th and 35th place respectively. Just sixth tenths separated the two, with Raiders’ visual scores largely making the difference. Colt Cadets finished as high as 33rd in percussion, while Raiders scored as high as 31st in visual analysis.