NCAA basketball action gets back underway this week for the second half of the annual tourney, giving Drum Corps International a choice opportunity to pay tribute to its own "Sweet 16." Just a handful of spots shy of earning a spot among the elite "Top 12," but always immensely entertaining, here's a look back at 16 years of 16th-place corps who have graced the football field at the DCI World Championship Semifinals. 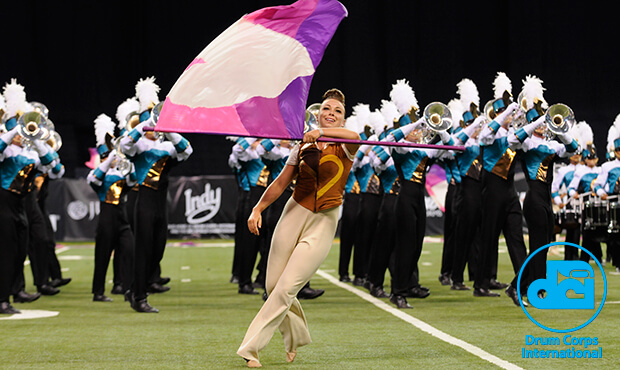 2013 Pacific Crest
"Transfixed" | 16th place, 82.300 | Indianapolis, IN There was a lot of spellbinding and riveting attention to others in "Transfixed," about the oft-rocky journey of love. Besides the corps' wave-in-crest logo seen as a drill formation during the opener, fans saw the entire corps seemingly infatuated with the drum line, heart outlines moving away from each other, and two corps members in different sections forming hearts with their upper bodies. Watch a video clip of this production. Buy this complete performance on DVD. 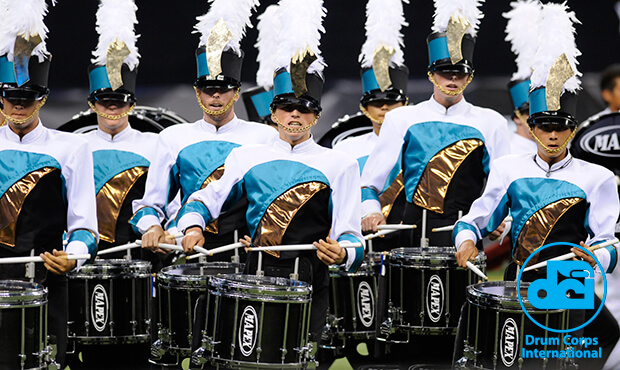 2012 Pacific Crest
"The Spectrum" | 16th Place, 80.250 | Indianapolis, IN An individual's personality is comprised of many elements, just like "The Spectrum" of colors. Throughout this production, the color guard members continually changed parts of their costumes to match the music, starting with pure white. Each color took us on a different journey through one's personality traits, such as fierce red, melancholy yellow and fun blue. Watch a video clip of this production. Buy this complete performance on DVD. 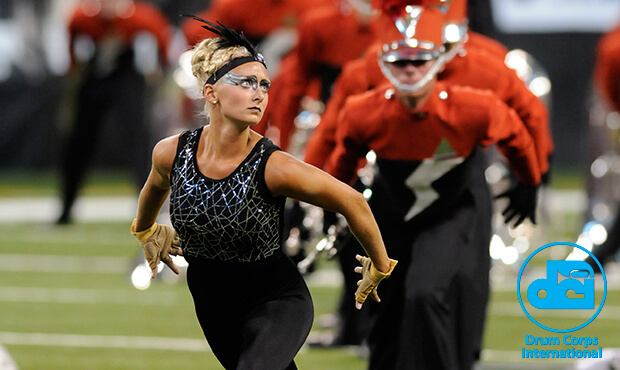 2011 Colts
"Deception: The Jagged Edge" | 16th Place, 82.250 | Indianapolis, IN The 2010 Darren Aronofsky directed film, "Black Swan," inspired the plot of "Deception: The Jagged Edge." In this production, a ballerina in white represented the white swan, a symbol of all that is good. The ballerina in black was the black swan, a symbol of evil. But looks can be deceiving, and it isn't until the ultimate battle for supremacy at the end that we learned the harsh, jagged truth. Watch a video clip of this production. Buy this complete performance on DVD. 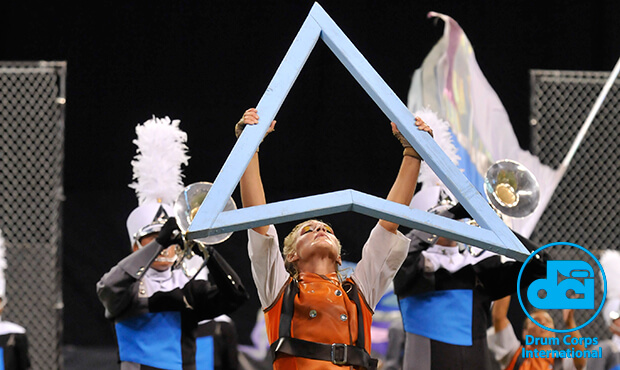 2010 Spirit
"Forging an Icon" | 16th Place, 81.450 | Indianapolis, IN The stylized delta that represents the corps was designed, fabricated and refined to a glistening perfection during "Forging an Icon." A busy factory filled with the mechanical sounds of air compressors and jackhammers set the stage for the fabrication of the icon during this production. But once constructed, the job order wasn't complete until a couple gallons of paint were thrown over everything to put the final luster on the product. Buy this complete performance on DVD. 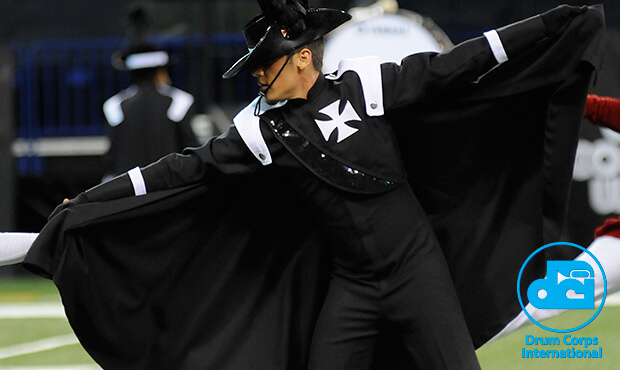 2009 Crossmen
"Forbidden" | 16th Place, 81.650 | Indianapolis, IN A story that was anything but warm and fuzzy, "Forbidden" explored the love of two people who could not be together. Consequently, it was full of darkness, angst and a propulsive nervous energy that was uneasy at times. The introduction of color in the guard section during this production shocked the senses amidst the reserved palette of black and white uniforms with long black capes. Buy this complete performance on DVD. 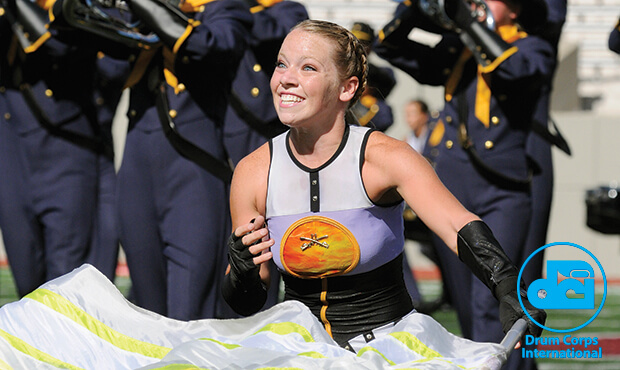 2008 Troopers
"Iron Horse Express" | 16th Place, 81.100 | Bloomington, IN The Troopers celebrated their 50th anniversary with "The Iron Horse Express," conveying a nostalgic sense of days long past when people in the West gathered along newly laid railroad tracks to watch the great machines chug by. Many train-like visual and musical references throughout the program captured the marvel of the locomotives that opened up the vast western frontier to settlement, leaving steam, smoke and wide eyes in their whistle-blowing wake. Watch a video clip of this production. Buy this complete performance on DVD. 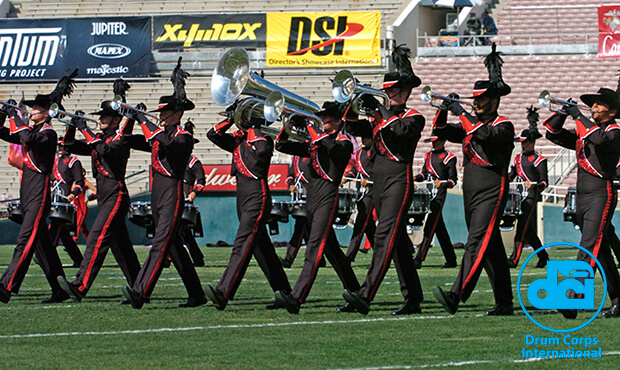 2007 Crossmen
"Metamorphosis" | 16th Place, 81.600 | Pasadena, CA "Metamorphosis" reminded us that the Crossmen had a long and glorious history that well pre-dated their move from the East Coast to Texas just prior to the 2007 DCI summer season. Audio snippets of memorable and timeless corps selections were woven into the fabric of Hindemith's "Symphonic Metamorphosis." The old and the new united during this program to assure us that the corps would be around for decades to come. Buy this complete performance on DVD. 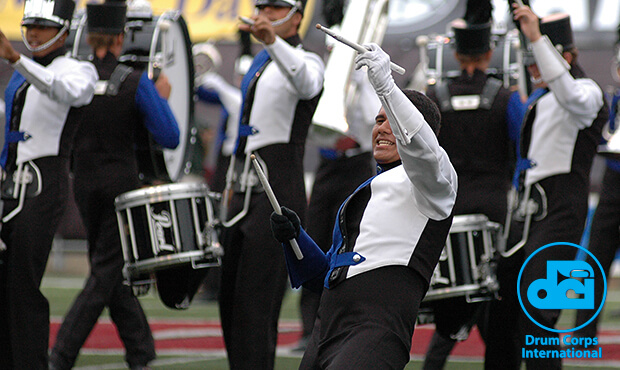 2006 Capital Regiment
"Life Rhythms: Work, Rest and Play" | 16th Place, 80.825 | Madison, WI "Life Rhythms: Work, Rest and Play" dove headfirst into the great rhythmic tides that guide our lives; such as day and night, the changing of the seasons and our breaths and pulses. During the production, audience members witnessed the hectic commute to a tense workplace, the unwinding of nerves during a much needed break of relaxation, and the thoroughly fun-filled times of playful abandon that recharge our body's mental and physical batteries. Watch a video clip of this production. Buy this complete performance on DVD. 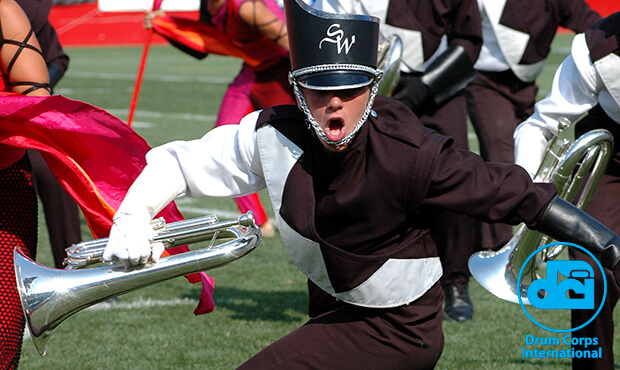 2005 Southwind
"A Distorted Imagination" | 16th Place, 80.950 | Foxboro, MA "A Distorted Imagination" could be thought of as a constantly evolving musical-visual sculpture of the mind. Throughout the performance, musical snippets floated in and out of one's consciousness like a dream that wandered into new and uncharted subconscious territory. Just as the music subtly shifted, so did Southwind's block drill formations. Unusual shakos pointed on the side emphasized that this production was anything but centered on convention. Watch a video clip of this production. Buy this complete performance on DVD. 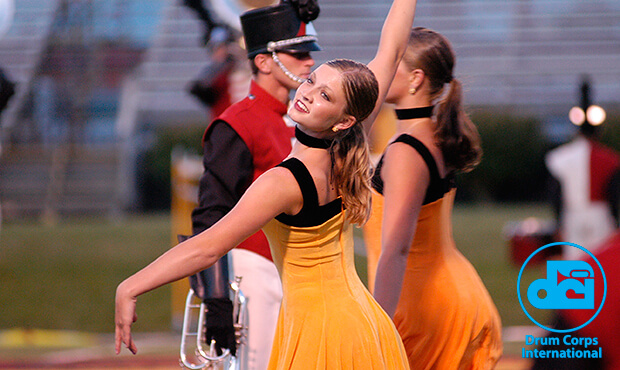 2004 Colts
"From the Heartland" | 16th Place, 81.325 | Denver, CO "From the Heartland" evoked the spirit of Midwest Americana. A high-energy celebration of regional values, a tribute to the crisscrossing railroads and homage to the mighty Mississippi River, the show was ultimately a personal reflection of the corps upon itself. Buy this complete performance on DVD. 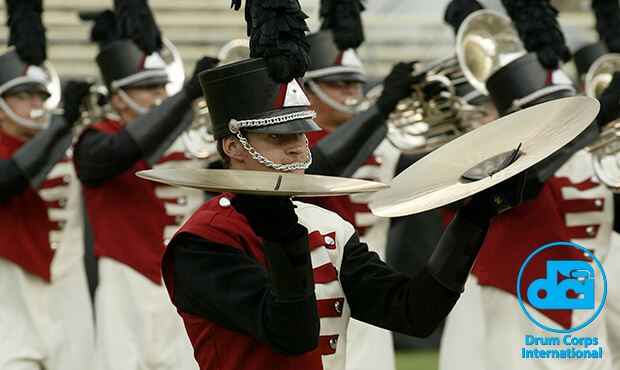 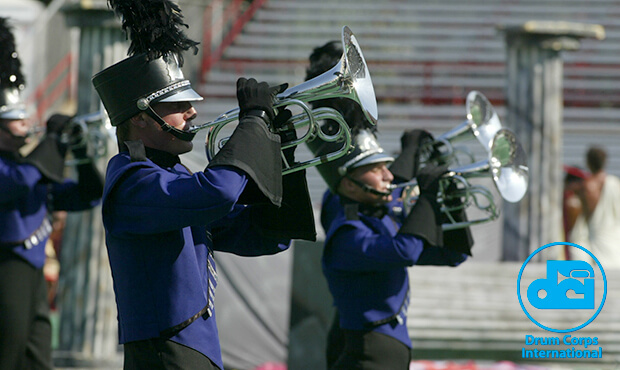 2002 Carolina Crown
"Greek Mythology, Stories of Gods and Heroes" | 16th Place, 81.800 | Madison, WI Crashing thunder and hurtling lightning bolts announced that "Greek Mythology, Stories of Gods and Heroes" was poised to unveil the secrets and desires of the greatest figures from ancient folklore. The production covered everything from the supremacy of Zeus, to the passion of Eros and the folly of Icarus, to the brutality of Medea. 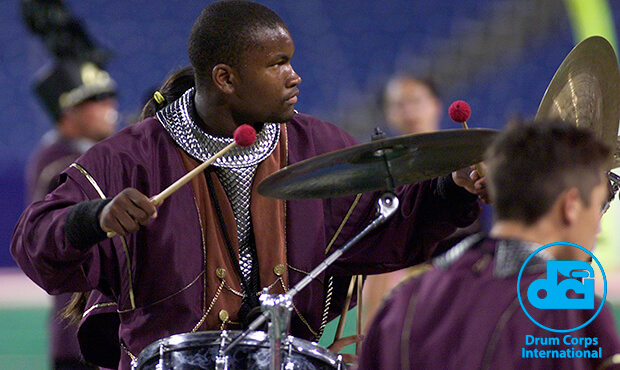 2001 Mandarins
"Festival of Music" | 16th Place, 79.300 | Buffalo, NY With "Festival of Music," the 2001 Division II World Champion Mandarins provided a lesson in how smaller corps could make it big time. There was nothing "small" in this production that celebrated the music of British brass band composer Phillip Sparke. It was full of jaunty lip and finger gymnastics for the brass players that would challenge even the largest corps. 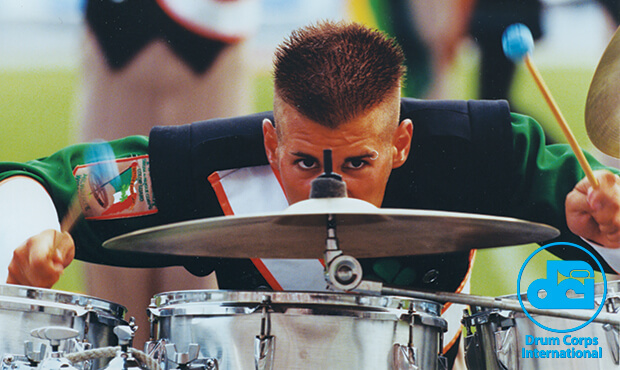 2000 Pioneer
"Dances of Brigadoon" | 16th Place, 77.600 | College Park, MD The spirit of the Scottish Highlands came alive during Pioneer's salute to the Lerner and Loewe musical, "Brigadoon." Sounds of the mystical village's fair, as well as affectionate expressions of love, cheerfully led into the exuberance of the production's most popular number, "Almost Like Being in Love." 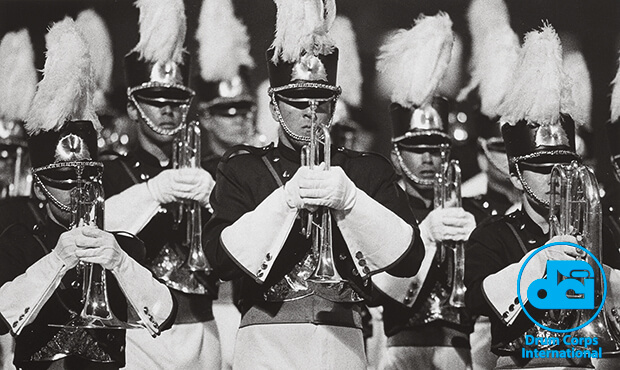 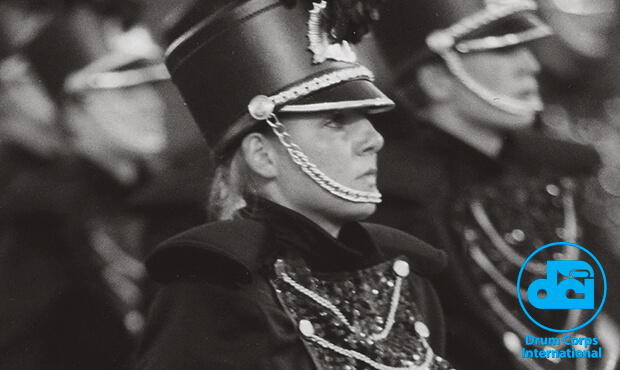 1998 Kiwanis Kavaliers
"An American in Paris" | 16th Place, 78.500 | Madison, WI On a canvas of football-field green, the Kiwanis Kavaliers painted and danced the themes of American composer George Gershwin and his "An American in Paris" in 1998. Working from a palette of rhythm and color, the Kavaliers left impressions, both bold and pastel, in swatches of movement and melody. Photos: Drum Corps International, Drum Corps World archives.