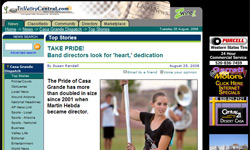 With the conclusion of the 2008 Drum Corps International season, marching musicians have switched gears getting ready for the Fall. Now many drum corps students and staff members have taken their drum corps expertise and skills back to their hometowns while continuing their quest for excellence with their high school marching bands and other performing groups.

The Casa Grande (Ariz.) Valley Newspaper recently published an article on the Pride of Casa Grande Marching Band, an ensemble that is starting its season with many drum corps veterans among its ranks including those from the Santa Clara Vanguard (Santa Clara, Calif.), Blue Devils (Concord, Calif.), Colts (Dubuque, Iowa), Cadets (Allentown, Pa.), and Academy (Tempe, Ariz.).

Read the article on TriValleyCentral.com.