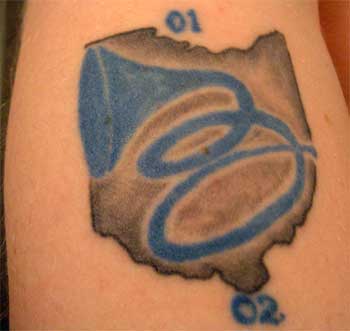 Evan Kleve, who marched soprano for the Bluecoats in 2001 and 2002 (his ageout year), sent in this one. "Some good advice is never to get a tattoo unless you are 100 percent sure it's something you'll never regret. I always sort of wanted a tattoo, but I could never really commit to anything. Then my life changed when I got into the Bluecoats. I am tremendously proud of my experience in the Bluecoats and I wanted it forever immortalized on my arm. There's no way I'll ever regret getting a tattoo that represents such an extreme accomplishment.

"I finally got around to getting this tattoo exactly one month before move-in 2002. I made the artist swear to me that it would heal in time before move-in, because I was going to be spending an insane amount of time in the brutal sun. It had just barely healed on move-in day.

"I love my tattoo because it was on me for every show in 2002. Every time I look at it, it takes me right back to that field in Madison and all the practice fields that we gave so much of ourselves on. It's also a reminder that I can accomplish anything I put my mind to."

Thanks Evan!
E-mail your Forzato submissions -- and we will get to them all, in time (and we're posting them in the order they were received) -- to dave@dci.org along with where and when the photo was taken. Send some biographical information about yourself as well. We'll give you full credit. Also, let us know if you want your e-mail address included.