Many aficionados will say that the Thanksgiving holiday and the drum corps activity go hand in hand like the oranges, reds and browns in a picturesque autumn scene. Historically, Thanksgiving weekend has been the date of many World Championship television broadcasts where friends and families would gather together to relive the previous summer's World Championship competition. For corps members, November marks the unofficial start to the coming drum corps season as thousands of students head to audition camps vying for positions in the most elite and exclusive marching music ensembles. There always seems to be the sounds of drum corps in the air when the leaves fall off the trees and football season is in full swing. 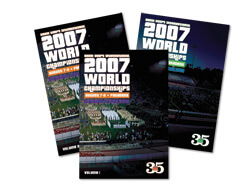 With Dolby Digital surround sound, multiple video angle options, show designer commentary, off-the-field vignettes, and more, these DVDs will put you right inside the action of all the top 2007 World Championship performances from what has gone down in the history books as one of the most competitive seasons to date.

Take this opportunity to share the excitement of the 2007 World Championships as they took place this past August in Pasadena, Calif.