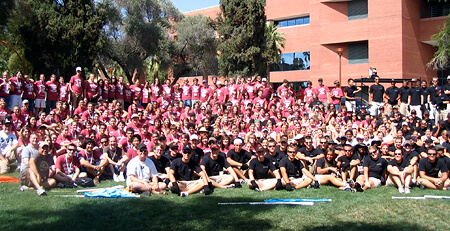 Academy members (black shirts) with student leaders who attended the corps'
Summer Marching Academy leadership camp at Arizona State University.
The Academy's show this year is composed of mostly original music in order for the corps to be able to tell their story without limitations. Through three intriguing characters and the musically diverse sounds of hard bop, funk, a classic love song, action movie music, reggae and swing, the story of "The Chase" is told. Richardson says the Academy staff is striving each day to design this show to uphold the standards that the world's best drum corps have set. "One of the biggest goals we have is to represent this incredible activity in the highest manner," he said. As Academy members prepare for their first competition this Friday in Riverside, Calif., the excitement around them begins to grow. After being competitive for three years and coming off of a World Championship season in 2006, moving to Division I is something they are proud of. "Being accepted as a Division I corps this year is an honor," said Richardson. "The opportunity to perform in front of large audiences at major regional events and being able to be a part of that history is very exciting for us." See the Academy in action this Friday in Riverside, Calif.