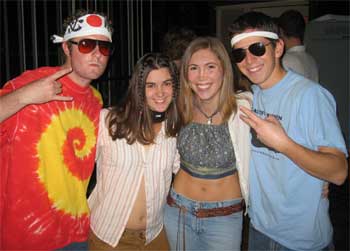 Meghan Davis sent in this one.

"This fall, I played in the pit orchestra for the University of Illinois fall musical, "Hair." Because the pit was onstage, we got to dress up in character. The pit was small, only about 10 people, but four of us march drum corps. From the left is Cavalier tenor drummer and drum sergeant Ben "Seaver" Collins (sporting some gear from his recent trip to Japan), Glassmen mellophone player Stephanie Silosky, me (I play mellophone with the Bluecoats) and Cavalier drum major Aaron Brizuela. Steph and Ben aged out this past summer, Aaron and I will age out in '05."

E-mail your Forzato submissions -- and we will get to them all, in time (and we're posting them in the order they were received) -- to dave@dci.org along with where and when the photo was taken. Send some biographical information about yourself as well. We'll give you full credit. Also, let us know if you want your e-mail address included.