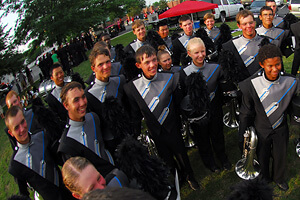 Legends
Finally, spring has arrived and that means the start of the summer drum corps season is less than 100 days away. For student musicians and performers who think joining a corps is a fleeting thought for 2011, now is the time to take advantage of a "last call" for available positions in a number of Drum Corps International units in both World and Open Classes. Though most DCI corps typically do their major recruiting throughout the fall and winter months, even when the spring rolls around, many groups—even those among the World Class elite—are still looking to fill out their brass sections, drum lines and color guards. "Corps have spots becoming available at this time because there's a natural attrition that happens over the winter and the spring," said Santa Clara Vanguard Executive Director Jeff Fiedler. "There are any number of reasons why a current member has to give up his/her spot in a corps, suddenly making a spot available: college tuition increases announced, loss or lack of a job, not enough money for the fall college term or a reduction in financial aid, life situation changes, sudden illness or injury … you name it, it's happened." Fiedler says that the best way to stay on top of available positions is by keeping an eye on the websites and Facebook/Twiiter pages of the corps. If you have the desire to spend the summer as part of Marching Music's Major League, make the decision to do so before it's too late. Just as quickly as an opportunity is posted, a corps may remove the announcement depending on the response received.

Jersey Surf
"Obviously, at this date, corps are looking for someone who can 'jump right in' and will have some marching experience – either as an experienced corps or marching band/concert band student," says Fiedler. "But someone who has the finances to cover the cost of the corps' fees and who can clear his/her summer schedule and jump on board is often just as important." The Open Class experience Open Class corps, which typically tour less extensively than most of their World Class counterparts, are often the entry-level ticket for marching musicians looking to take part in the drum corps experience, but who cannot make the commitment to tour 24/7 from May through August. "Open Class corps provide a great understanding of what a drum corps experience will entail," says Ibe Sodawalla, Executive Director of the Open Class Legends. "There are places to march and openings, and sometimes it is not only about where you'd like to march one day, but it is about finding a place to make your experience happen." As with most corps, Sodawalla says that doing your own research and checking out a corps' website and Facebook page is the best way at this time of year to find a place to march. Legends, for example, keeps a running tally of vacancies on the homepage of its website. Corps administrators update the list weekly as positions are filled or new ones open up. "Interested applicants should contact corps administration by showing their interest and some places may have an application that one can fill out, as well. This will allow the staff to follow up with someone accordingly," Sodawalla said. 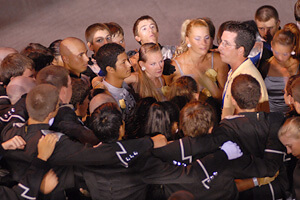 7th Regiment
Where do I start? Drum Corps International keeps a complete list of Open and World Class corps contacts in the info section at DCI.org/corps. Each list includes a corps' address, phone number, e-mail address, as well as links to the corps' websites, Facebook and Twitter pages. View all Open Class corps. View all World Class corps. For those with the itch to spend this summer marching in a drum corps, the journey can start simply by reaching out. "If you'd like to march this summer, keep looking. Send an e-mail, send a Facebook message inquiry, make a phone call to the corps' office," says Fiedler. "Just don't be afraid to ask!" Get your name out there, and before you know it, you could be standing in front of thousands of fans at the World Championships, celebrating an incredible season with lifelong friends you've made over the course of a single summer. Sodawalla says, "If you are passionate, driven, ambitious, hard working, and excited about performing; drum corps this summer is a perfect fit."