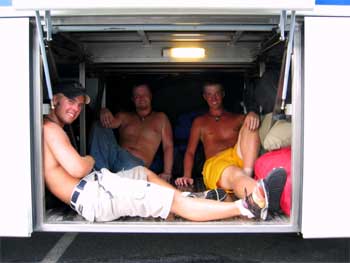 Nate Olson, a Bluecoats vet (in 2001 he played soprano and in 2002 and 2003 he played mellophone), sent in this one. "This picture was taken at the Bluecoats' housing site -- Conrad Weiser High school outside of Allentown, Pa. The loading crew (front Phil Amrine, back left Will "Rubble" Wells, back right Nate Olson) was named "The best loading crew ever" because of the incredible amount of space left under the buss after everything was loaded. The bays of the buses are three suitcases wide and as much stuff as you can stuff above them. In Allentown (our last time loading for the year) we successfully left two-thirds of the bay open." Thanks Nate! E-mail your Forzato submissions -- and we will get to them all, in time -- to dave@dci.org along with where and when the photo was taken. Send some biographical information about yourself as well. We'll give you full credit. Also, let us know if you want your e-mail address included, to get feedback from other drum corps fans.