From the Cadets' Web site: In an interesting break from the norm of fall meetings with drum corps program coordinators and staff members to hash out a plan for a corps' 2007 show concept and design, the Cadets have started a contest open to the general public to find the best idea for the corps' 2007 program. 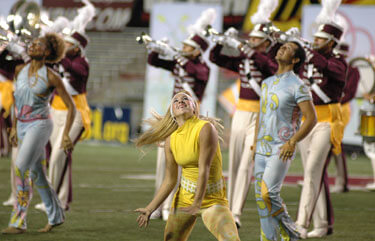 The Cadets brought an Alice in Wonderland inspired
program to the field in 2006.
George Hopkins, the Cadets' director, said: "On a plane trip one evening, I was reading a book on leadership, and there were a few chapters on the 'open source' movement, wherein, the theory is, that the more people working on a problem, the greater the possibility for grand success. So, I was thinking, why not here?" The winner will receive $500 and the opportunity to see his/her idea come to fruition on the football field. Read more on www.yea.org.