In front of a crowd primarily made up of high school music students taking part in the Bands of America Summer Symposium, corps competing in Friday night's DCI Central Illinois major event in Normal, Ill., had the opportunity to perform for a wildly enthusiastic group, eager to cheer on all performers. 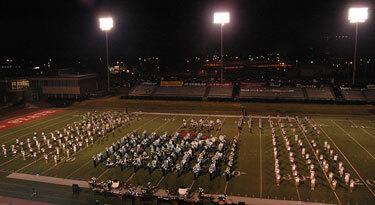 Members of the Cavaliers with the help of marching band students around the outside perform the opener to MACHINE.
After a joint performance of the Cavaliers with the Bands of America Summer Symposium marching band members, scores were announced, leaving the Cavaliers with the gold after scoring 81.800 to Bluecoats' 80.150 and Madison Scouts' 75.400. "We performed pretty well tonight," said Jeff Fiedler, the Cavaliers' corps director, "We've been here since Tuesday rehearsing, so we were able to do a once over on every facet of the show. We were pleased with the performance and where we're at, and we know what we need to work on in the next 10 days." Bluecoats continue to produce impressive performances, ending up Friday just over a point-and-a-half behind the Cavaliers. According to Bluecoats' drum majors Lizz Lewis and Joe Beitman, competitive success is far from the top subject on the corps members' minds.