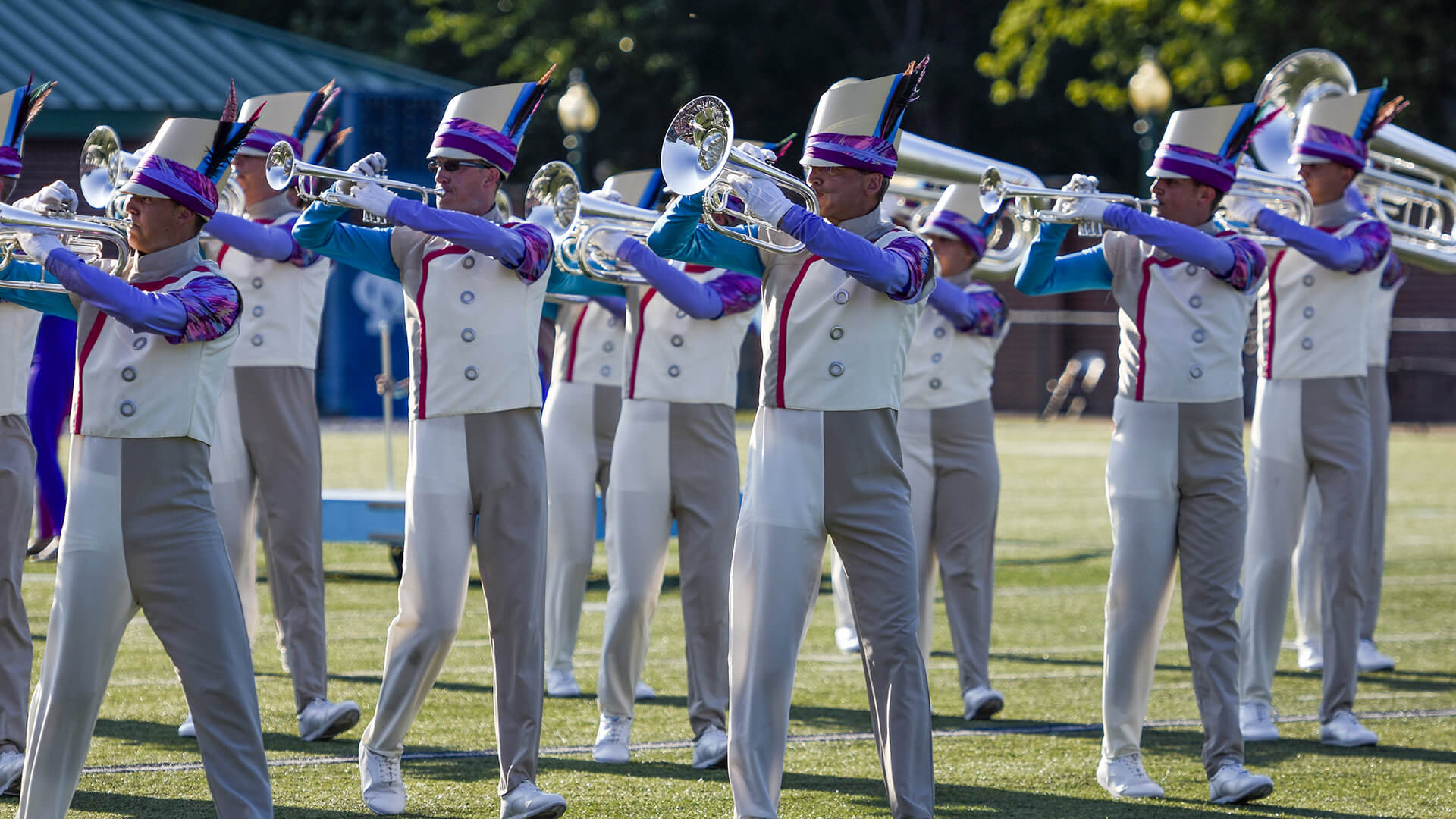 THE COMPANY performs during the 2017 DCI Open Class World Championships in Michigan City, Indiana.Photo by: Drum Corps International
THE COMPANY, an ensemble that spent part of its summer in the U.S. performing on the DCI Tour, has earned the 2017 Drum Corps United Kingdom (DCUK) Championship title.

The corps from Derbyshire, England edged fellow British corps Kidsgrove Scouts by a slim margin of just 0.15 points, taking first place in the Finals competition with a final score of 86.300 at the event held Saturday, September 23, in Widnes, United Kingdom.

This was a special year for the young corps founded in 2009, one that saw the group take its first-ever trip to the United States at the end of July. As part of the Drum Corps International Tour, the corps earned the International Class title, awarded during the DCI Open Class World Championship Finals in Michigan City, Indiana.

CO are proud to announce we are the 2017 DCUK : Drum Corps United Kingdom Champions This is the Corps 4th DCUK title...

Posted by THE COMPANY Performance Ensemble on Saturday, September 23, 2017

“This is the corps' fourth DCUK title and we have just joined a very elite group by completing a three-peat of championships from 2015 to 2017,” the group posted on its Facebook page following Saturday's event. “We are very proud to join these fantastic corps and want to thank everyone who has made this year such a special one.”

THE COMPANY also achieved top honors this weekend in the visual, percussion, brass, and music captions at Select Security Stadium.

On Saturday, Kidsgrove managed to decrease a 1.35-point deficit from the Prelims competition to finish just a hair behind THE COMPANY. Kidsgove captured the highest marks in the color guard and general effect captions.

Two other corps represented DCUK's Junior Class division, with Concord Youth Music taking first place with a score of 62.450, followed by Thurrock Marching Brass with a score of 57.350.

With the Concord AllStars taking the 2017 DCUK DrumLine Battle title, the event gave participating units a chance to have some laidback fun, like those from Liberty Drum Corps who managed to bring the entire Royal Family, including Queen Elizabeth's famed Pembroke Welsh Corgis to the stage.

Also announced during the weekend were the newest inductees of the organization's hall of fame, including Joe Fitzpatrick, John Johnson and Mark Mayes.

Serving as a board member and eventual chairman of DCUK for a number of years, most recently Fitzpatrick has been instrumental in spearheading the introduction of Drum Corps International's SoundSport and DrumLine Battle programs into the United Kingdom.

With Saturday's home-country competition behind them, a number DCUK's corps will now turn their attention to the Drum Corps Europe Championship. The annual event will take place on Saturday, September 30 in Kerkrade, Netherlands, pitting participating British corps against groups from other European countries.