Name, age, hometown: My name is Abigail Puzzo and I'm 19. I was born at Andrews Air Force Base, in Maryland, but when I started Crown I lived in Fredericksburg, Va., and now I live in Tucson, Ariz., for school. What corps are you in and what is your role this summer? I march
in Carolina Crown and I am one of three section leaders in the baritone/euphonium section. Where I go to school and what I'm studying: I attend the University of Arizona and I am studying equine science with a minor in music. 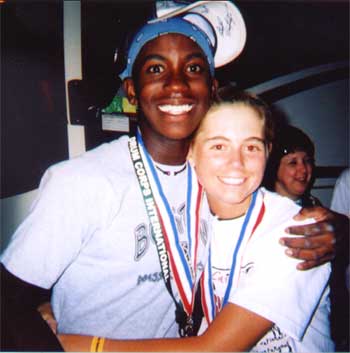 Abigail Puzzo and Ryan Davis, a fellow Crown baritone player.
Give us your full drum corps/marching music background. I have marched two years with Crown, '04 and '05. I marched second baritone my rookie year, and lead in '05. I'm currently marching lead baritone. What's your practice schedule like? I try to keep up with the baritone, but lately it's been tough. My main instrument is trombone, so I play that in all my ensembles, but when I get a chance I practice the baritone if I can get my hands on one. Three to four times a week is good with my schedule. What does your ideal free day consist of? Well in '05 we had two almost complete free days. We had a parade in Orlando, but I like parades, so it was fun. I guess the ideal free day would be get up at around 10, eat and load, and be on the road by like 11:30. Then a
Wal-Mart stop for like an hour. Then head to wherever we are having our free day. Then leave with an appropriate time to get to the next housing site and have around four hours of floor time. Favorite pig-out food: Oatmeal pies! They are the best thing on tour. In the shower you can hear me singing: I don't really sing in the shower. I'm usually too rushed to even think about it. I have bad time management. The last good book I read: "The Wedding," by Nicholas Sparks. The last great film I saw: "Wallace & Gromit in The Curse of the Were-Rabbit." Best movie ever. Jobs I have/have had: I worked on an Agritainment Plantation, the kind with a maize maze with a barn and a market and pumpkins and such. I also worked at a gymnastics place as the front desk and computer lady. My favorite TV show: I have to admit I really don't watch enough TV to have a favorite show. I mean, of course, there is "Friends" and "CSI" and stuff like that, but I don't watch it enough to really have a favorite. What has been your formative drum corps moment? When I was asked out in front of the arc to play my two-note lip slur and I did it really well. I was moved to lead right after that. It was like a challenge and I guess you could say I passed it. What would you be doing next summer if you were not marching? I would either get an internship at a large animal vet clinic, or study abroad in Italy. How did you decide to be a member of your corps? Well, my father marched with the Royal Crusaders in 1980. He has the tapes and music and he really got me interested. Then he took me to the first camp and I was hurting but I loved it, and I really worked hard to get a spot. What first attracted you to the drum corps activity? My father. I've never actually been to a show, I have only marched at them. I watched the 1999 videotapes and that was it. What advice would you give to young people who want to march? Be
confident and never give up, it's all a mental game. What I want to be when I "grow up": A large animal vet/equine
specialist, and I want to teach a high school equine or agriculture class. I also want to tech at a drum corps. The year is 2030. What does a DCI show look like? I would assume more technology will be involved, because it's already starting to take off. I would hope that the musical aspect of DCI doesn't change too much. I really like themed shows, like "The Planets and the Future," "Disney Reflections."