Name, age, hometown: Alex Bender, 19, Harrisburg, Pa. What corps are you in and what is your role this summer? I play trumpet for the Bluecoats. Where I go to school and what I'm studying: I attend James Madison University (JMU) in Harrisonburg, Va., and I study music education. Give us your full drum corps/marching music background. My high school, Susquehanna Township, was in the top two or three in TOB all four years. In 2003, I got cut from Bluecoats so I got a late minute call (June 11) to fill a spot in the Patriots Drum and Bugle Corps from Rochester. In 2004, I auditioned for and made it into the Bluecoats, so 2006 will mark my third summer there. 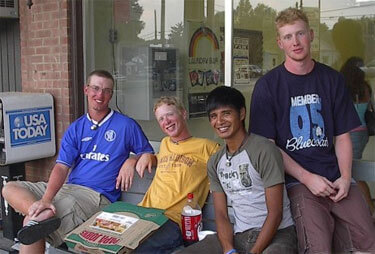 Bluecoats lead trumpets (left to right) Nate Olson, Alex Bender, Ismael Ledezma, Austin Clements
What's your practice schedule like? I start every day with the Maggio warm-ups and his first high note exercise. Then I do the "Buzzing Book" by James Thompson and Clarke studies and multi tonguing. Later I'll get into the Vizzuti book, transpositions, odd meter, and solo pieces and ensemble music. It usually takes me a good three hours to get through everything. With ensembles, I'm usually playing at least six hours total a day.    What does your ideal free day consist of? Going to do laundry. Favorite pig-out food: M&Ms In the shower you can hear me singing: The "Yo-Ho" song.

The last good book I read: "The Miracle of Mindfulness" by Thich Nhat Hanh. It's a great book for relaxation and better efficiency on trumpet or any instrument. The last great film I saw: "Rent" Jobs I have/have had: Dining services at JMU and Pennsylvania state employee over Christmas break. My favorite TV show: "Sportscenter," "ER," "CSI" What has been your formative drum corps moment? When Eric Kitcherman came to one of our high school marching band rehearsals. Something happened that influenced me to want to do this thing [drum corps] I'd never heard of before, and two weeks later I auditioned in Ohio. What would you be doing next summer if you were not marching? Working or taking summer classes, which sadly is a good possibility. How did you decide to be a member of your corps? Laura Rockman, Larry Hershman and my band director, Bill Perbetsky, all had big influences on the choice, because I had no idea what I was doing. What first attracted you to the drum corps activity? Seeing the 2002 Cavaliers performance on the DVD. That just blew me away. What advice would you give to young people who want to march? If you have the mental toughness to do it, do it. Don't worry about not making the line, put yourself out there and see what happens. Once you get in, enjoy it, but kick your own butt before other people have to, and don't ever think about how soon the season is over. It will make it go slower. What I want to be when I "grow up": My huge lifetime goal is to play trumpet in orchestra pits on Broadway and live in a closet size (so I don't have to clean) apartment in New York City, and/or do commercial lead playing. Neither sounds too bad. I realize this may never come true, but it's a good goal to set. Eventually, I can't wait to teach high school band and put more focus into giving back and teaching.    Favorite drum corps personality and why: Definitely seeing Mickey Mouse every year give the Spirit of Disney award makes my day. I don't know if he really counts though. My second choice would be seeing James Landrum and Jessica Allen talk about DCI on the broadcast and seeing what DCI has done for them. Best drum corps show ever and why:
Cavaliers 2002- for the visual effects matching the musical effects
Santa Clara Vanguard 1989- for the history
Phantom Regiment 2003- for the emotion
Cavaliers 2004- for the attitude The year is 2030. What does a DCI show look like? People marching around on a big football field blowing air through bent pieces of tubing with others holding guard weapons and sticks. I think I have the closest guess so far. Feel free to add anything else you'd like. Something that Chuck Dotas, jazz ensemble director at JMU, recently told me that made a big impression on me was this: Making music starts when you stop worrying about making a mistake, missing a note, or having the endurance to get through a song. That mentality traps you into thinking egotistically in the sense that you're worried about what other people are thinking of your playing. Therefore, your desire of acceptance from the audience becomes the goal instead of performing a great piece. The way to get around thinking egotistically is to think about what kind of effect the music has on you, how much you love the song, and how impressed you are with the composer's music that you have that urge to go and share it with other people and perform it so that they are privileged to hear it. Don't think about how awesome you will sound when you play it really well, but how awesome the music will sound when it's played by anyone in general. Take the focus off of yourself and instead put it on the composer's music. Enjoy being the actor as you are the musician telling the story and delivering the composers dialog. I mean yes, enjoy it and feel good when you play well, but don't worry about making mistakes. By just having and practicing this mentality, you can take your playing and performing to the next level and truly make music.