Name, age, hometown: Alex Larson, 20, West Des Moines, Iowa. What corps are you in and what is your role this summer? I'm with the Blue Stars, and I'm aging out on trumpet this summer. Where I go to school and what I'm studying: I go to Iowa State, and am majoring in marketing. Give us your full drum corps/marching music background. I marched with Waukee High school in Waukee, Iowa, am in my third year with the Iowa State University Cyclone Football varsity marching band, and this summer will be my second with the Blue Stars. 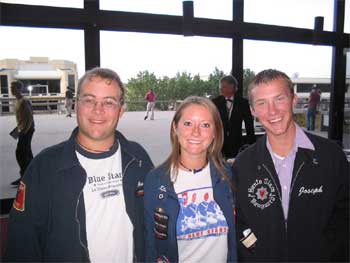 Alex Larson, Rachael Waggoner and Joe Smith just after a performance of "Blast!" at Iowa State.
What's your practice schedule like? Right now, with finals, it's whenever I can fit it in, but I try to practice a few times a week. What does your ideal free day consist of? Downtown in a big city is great. There's always so much to do for everyone, no matter what your favorite thing is to do, and doing those things with your friends in the summer make it even more fun. If the city has an Apple store, it's an even bigger plus, with the free Internet service available. Favorite pig-out food: Pizza. In the shower you can hear me singing: Whatever drum corps show pops into my head, I guess. I don't sing in the shower too often though (and my roommates are probably grateful). The last good book I read: Hmm, last good book. That would have to be when I read the "Lord of the Rings" books a while back. The last great film I saw: "Batman Begins" was the last great one. I saw it in Chicago on a free day this summer. Jobs I have/have had:Nothing right now, school and band keep me very busy, but I've worked at Target and K-mart in the past. My favorite TV show: "Battlestar Galactica." What has been your formative drum corps moment? During finals week, one of our final run-throughs we did without any staff or members watching, just for us. Then I really realized how much I love this activity and everyone I was marching with. What would you be doing next summer if you were not marching? I probably would be doing something boring, like working or taking classes. I wouldn't be able to stand being away from drum corps, though, so I would probably be road-tripping all over to see shows. It's what I did the two summers before I marched. How did you decide to be a member of your corps? Many things attracted me to the Blue Stars. I had a few friends in Blue Stars who had wanted me to come for quite a while. The opportunity to jump into a growing program and be part of bringing the Blue Stars back to Division 1 also attracted me. What first attracted you to the drum corps activity? The precision and power of the groups was the initial attraction. Getting your face blown off by a horn line one minute, but then getting chills the next. After my first show I knew it was something I had to do. What advice would you give to young people who want to march? Just march. It doesn't matter where or how, it will be the best experience of your life, and you'll find the best friends you could ever hope for. What I want to be when I "grow up": Grow up? I plan to stay 20 and keep marching forever! Seriously, though, I'll probably work in marketing in some company after graduation. If the company was music-related, that would be a big plus. Favorite drum corps personality and why: You've got to love Brandt Crocker. His announcing always hypes you up for a show. Best drum corps show ever and why: This is a hard one, I have so many favorites. I'm going to go with Phantom Regiment 2003. I could listen to that music again and again and again (and have!). It gives me goosebumps. Closely behind would be a lot of SCV shows, especially the '87-'89 years. The year is 2030. What does a DCI show look like? With how much innovation there has been in the past 25 years, I can only imagine what it would look like 25 years from now. Drill pushing 300 bpm? Who knows what crazy stuff they'll come up with. I can't wait to see it. Feel free to add anything else you'd like. I can't wait for this summer to get here. 2006 is going to be great!