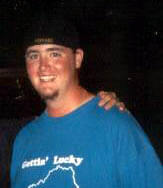 Alex Caldwell
Name, age, hometown: My name is Alex Caldwell, aka the Yeti. I am 20 years old, and I am from Alexandria, Ky. ^What corps are you in and what is your role this summer? I play trumpet for Southwind. Where I go to school and what I'm studying: I currently go to Northern Kentucky University and right now I'm taking general education classes. Give us your full drum corps/marching music background. This is my seventh year marching. I marched four years for Campbell County High School, and this will be my third year with Southwind. What's your practice schedule like? I practice whenever I can. Sometimes it's hard for me, like when I am in class for five hours then I have an hour break before my next class. But when I do practice it's at home, and sometimes I get my little brother, who is also a trumpet player, in on my practicing and we jam out. What does your ideal free day consist of? Hanging with my friends, eating, walking around whatever city we are in. Just having fun. Favorite pig-out food: Pizza. It's every college student's choice food, and I even worked in the pizza industry before and I still love eating the stuff. In the shower you can hear me singing: Some random song that is stuck in my head. A lot of different songs. The last good book I read: "The Inner Game of Tennis" by W. Timothy Gallwey. The last great film I saw: "The Producers" Jobs I have/have had: Pizza/hoagie cook, and I also teach trumpet lessons. My favorite TV show: "Family Guy" What has been your formative drum corps moment? This past season when we came off the field from quarterfinals, we arched up like we always did. Karl gave us the "relax" and as soon as we did that, Megan Cook began to sing the solo of our corps song. And as soon as we all joined in, emotions started flowing -- and that's a moment I won't forget for a long time. What would you be doing next summer if you were not marching? I would be working -- a lot. And going to watch local DCI shows. How did you decide to be a member of your corps? Well, a friend of mine that I marched with in high school told me about how Southwind had some holes they needed to fill. At this time I wasn't even considering marching because it was the month of March. So I talked with my parents about it and I played e-mail tag with Mike up until April camp. So I joined late, but I had a great time doing it. What first attracted you to the drum corps activity? I honestly didn't know what drum corps was until my sophomore year of high school. That year our show was "Jesus Christ Superstar," so the director at the time, Mr. Hedges, showed the group '99 Madison Scouts show (they played Jesus Christ Superstar that year). And from the first big hit of that show I knew what I wanted to do. What advice would you give to young people who want to march? If you know you want to do it, DO IT! Don't be scared of what the outcome might be. If you have confidence in yourself, and a good attitude toward others, you are what a corps is looking for. What I want to be when I "grow up": I would like to be a music video producer. Maybe even work for DCI or a corps and do the video production for them. Tape editing, that kind of stuff. Favorite drum corps personality and why: Wow – that's a "toughy." In the more recent years I would have to say Dennis DeLucia. He has been with the activity for a long time and knows what he is doing. Best drum corps show ever and why: Man, another tough question. In the past couple of years I have seen so many good shows. But I'm going to go with my favorite, the '99 Madison Scouts. That's the first show I saw, and it showed me a whole new experience I would get to be a part of. The year is 2030. What does a DCI show look like? I see some more complex drill, some uniform changes, the resurrection of some corps that are currently inactive or no longer with us. And a show, like a big regional, where all corps wear retro uniforms.