Name, age, hometown: Alexander Michael Casmiur Wilga (I know four names is a bit much), 19, Troy, Mo. What corps are you in and what is your role this summer? Pioneer, I am one of the two drum majors this season. Give us your full drum corps/marching music background. Pioneer 2003 to present, Trojan Pride Marching Band 2000-2003. How did you decide to be a member of your corps? I was looking for a corps in the late winter of 2003 and Pioneer offered me a spot right away. The rest, as they say, is that. 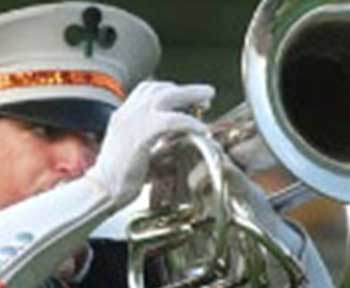 Alex Wilga
What first attracted you to the drum corps activity? A girl named Sara Sapp, who marched in the Colts, was the color guard teacher at my high school my sophomore year, and she is the one who got me interested. What advice would you give to young people who want to march? If you want to march all you have to do is try, and it doesn't matter where you march as long as you get the marching experience. The last good book I read: "Animal Farm" by George Orwell The last great film I saw: "The Phantom of the Opera" Where I go to school and what I'm studying: VanderCook College of Music in Chicago. I am pursuing a degree in music education with my primary instrument being euphonium. Jobs I have/have had: Schoolwork is my job. My favorite TV show: "Family Guy" How do you "blow off steam?" I practice my euphonium and listen to music. What has been your formative drum corps moment? This may sound weird, but it took place during the April camp in 2003. The corps was finishing up final fitting on uniforms for the performance that weekend. I went in and put on a uniform and I felt the overwhelming sense of pride. It was the moment when I first knew that I belonged to something that was bigger than myself. And still I get that feeling every time I put on my uniform. Best drum corps show ever: A tie between 1997 Pioneer and 1989 Phantom Regiment. What are you most looking forward to about the summer? There is a show this year that Pioneer will be at that is 10 minutes from my hometown. This will be my first actual "home show." Every other year my "home show" has been in a different state. To me, it's really exciting to know that my grandparents will be able to see me march a show. Best thing about being in a drum corps: The long-lasting friendships that are made throughout the corps. Worst thing about being in a drum corps: It ends way too soon. During tour, the best part of the day is: Ensemble, we finally get to bring it all together and see what we worked on all day fit in its place. During tour, the worst part of the day is: Waking up, it always comes too soon. Favorite drum corps personality and why: With out a doubt, that would have to be Roman Blenski. He always puts the members first in all things. He is very knowledgeable in all things, not just corps. And if it were not for him and his wife, Sue, I would not be where I am today. What I want to be when I "grow up": I plan on being a band director. Describe what you think a typical DCI show will look in 2015. More drill and faster movement. It's going to be nuts.