Name, age, hometown:Allison Lorraine Staples, 17 (as of April 14), Atlanta What corps are you in and what is your role this summer: Spirit color guard Give us your full drum corps/marching music background. I march with Collins Hill High School Screaming Eagle Band during the fall, and I march Collins Hill winter guard during the winter, then Spirit during the summer. 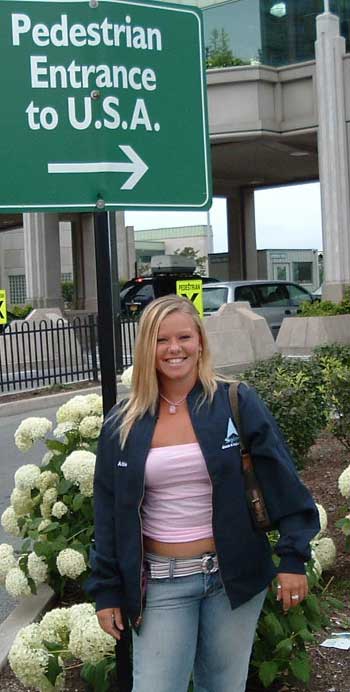 Allison Staples
How did you decide to be a member of your corps: I was introduced to it when I was in 7th grade maybe, while I was in Pennsylvania visiting family during the summer. My mom noticed that there would be a show one day, and so we went. At first I thought, "Oh gosh, band, geeky." Well, not at all. The one corps performance/show that I saw that really inspired me was the Jersey Surf. I wanted to be in them, that's all I could think about. Then my mom showed me there were many more to be in, and the different divisions and their meanings. What first attracted you to the drum corps activity: My mom showed me the way. What advice would you give to young people who want to march: OMG, it's the most amazing thing in the world. You meet so many different people and it becomes your family. Being on the field marching this amazing 15-minute show with the people who are close to you is the most incredible feeling in the world. Life will never be the same after traveling the summer in drum corps life. Just be prepared for hard times when you don't think you can push on. Just remember that tomorrow is another day. The worst part is over after all-days, because when tour comes you get to perform your show at the end of the day after the hard practices you put in. The best part is performing the show, because you get to live through the show you've been working SOO hard to produce all season. You'll never forget the experience, and after marching once, you won't be able to stay away from the sport/activity ever again. Do you have any favorite road anecdotes? Things that happen on the bus are always great memories, and then just the performing of the show makes for great times. The last good book I read: "Huckleberry Finn" for a school project The last great film I saw: "The Notebook" Where I go to school and what I'm studying: Collins Hill High School -- when I go to college I want to study sports medicine for an athletic training career. Jobs I have/have had: Babysitting is all I have done. Three CDs I'd want on a deserted island: Tough one. I would pick 3 of my MP3 CDs. They each have more than 100 songs, and they are all random with mixed up songs and artists such as Linkin Park, Switchfoot, Britney Spears, Christina Aguilera, Avril Lavigne, 3 Doors Down, Rascal Flatts, Leanne Rhimes and much more. My favorite TV show: Totally "The O.C." Favorite performers: Freddie Prince Jr. and Sarah Michelle Gellar How do you "blow off steam?": You have to talk it out and maybe talk to someone who can give you advice. If you're not the type who wants advice then just talk, you always feel better after getting it out. What has been your formative drum corps moment: The instructors always working to get you to do your best. Sometimes they go overboard, and they can be very lazy themselves, which doesn't help. You want to be great or to do your best, but you get pounded for it if you don't, so you may as well do it when they say to. It will benefit so much in the end if you do your best from the start. If this is your dream and you love it, you will always make sure to do your best. Best drum corps show ever: I have not seem many, so it'll have to be a recent one. I love the Cavaliers drill from the '04 "007" show, but my favorite show overall is '04 SCV "Scherezade" because the guard is featured so much and it's a really good guard show! What are you most looking forward to about the summer: Performing and making another family over again (you always lose people due to aging out or those who find it isn't for them). Best thing about being in a drum corps: The atmosphere of the people and being able to perform with them. Worst thing about being in a drum corps: The long all days that never seem to end (luckily this year spirit only has three and a half weeks of all days, last year it was five and a half, and I'd never worked so hard in all my life). During tour, the best part of the day is: Performing at the end and then getting to rest and watch movies on the bus on the way to the next place, but you have no clue whereit is (that's always fun, waking up not knowing where you are)! During tour, the worst part of the day is: The time we have for getting ready to leave a housing site. We never get a lot of time, so we rush and rush, and I always feel I'm going to forget something. Favorite drum corps personality and why: The personality of those who never give up and they strive for excellence. What I want to be when I "grow up": An athletic training teacher for a high school, or maybe a college. Describe what you think a typical DCI show will look in 2015: Man, you never know, it may have five movements by then, and maybe more crazy types of drill will be invented. The guard won't run across the field five times in one show, they'll run across it eight times a show. Feel free to add anything else you'd like: This can be the best experience of your life. It IS life-changing and it will affect everything you do. It will change your outlook on the world for the REST of your life.