Name, age, hometown: My name is Amanda Sanger, aka Manders. I'm 18 years old and I'm from Batavia, Ohio. What corps are you in and what is your role this summer? I'm a member of Southwind and I'm in the color guard. Where I go to school and what I'm studying: As of right now, I'm attending Miami University in Oxford, Ohio, studying psychology. Next year, I'm transferring and majoring in journalism and photography. 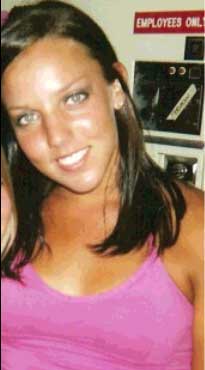 Amanda Sanger
Give us your full drum corps/marching music background. I began playing trombone in 5th grade and was in concert band until my sophomore year. I started marching when I was in the 7th grade, believe it or not. I marched for Glen Ester High School. I marched trombone for one year (I was the ONLY girl in the brass section). Starting my 8th-grade year, I was a member of the color guard and that continued until my junior year. I also was active in winter guard for three years and one year of indoor drum line (as a dancer, of course). I started drum corps my senior year and I've just completed my second summer with Southwind. What's your practice schedule like? I'm am currently not involved in any other color guard activities right now, which means I have to work extra hard to keep in shape for the summer, especially my arms and wrists. It's hard to find quality practice time, or space for that matter. You can usually find me watching re-runs of "Friends" while spinning my rifle in my tiny little dorm room. Once the spring comes, I'll definitely be outdoors doing a lot more spinning and throwing. What does your ideal free day consist of? First is being able to get semi-dressed up for the day. No one really gets to see what you look like in "normal" clothing, so it's a day to show off and get dolled up. It doesn't matter where we are, we always manage to have a great time. My day usually consists of shopping, exploring the sights, possibly catching a movie, and eating great food. Favorite pig-out food: Such a tough question, really. I don't know if these are really considered pig-out foods, but I would have to say Cheez-Its. I could seriously eat a whole box in one sitting. It's ridiculous, really. In the shower you can hear me singing: Anything and everything! I believe my most recent favorite group would have to be Panic! At The Disco. The last good book I read: "Autobiography of a Face" by Lucy Grealy The last great film I saw: "Rent" most definitely! Jobs I have/have had: I worked at Kroger (big grocery chain in the Midwest) since I was 15 and worked there for three years. I also worked a few months at Cheeseburger In Paradise (kind of like an Applebee's) before having to quit to leave for the summer. My favorite TV show: It's a solid tie between "Friends" and "Family Guy."

What has been your formative drum corps moment? Wow, that's a tough one. It would definitely have to be when we marched off the field for quarterfinals and after we all arched up and (drum major) Karl Stein told us to relax. Then Megan Cook broke out into the intro of our corps song. It was one of the most emotional and breathtaking moments of the summer. I was just watching all of our staff glaring at us. The one person that caught my eye was Mr. Steve Vento, and the look on his face just made me cry. It was simply amazing. What would you be doing next summer if you were not marching? Being completely depressed and being a couch potato. No, I'm kidding, but it would be a pretty tough summer without my family. Performing is the one passion that I have and without it, it would be quite the dull and lonely summer. How did you decide to be a member of your corps? Well, for the few years before I actually joined drum corps, everyone always encouraged me to do it, but I was always too scared and afraid I was never good enough. Then one day at a winter guard practice, one of my directors at the time, Mr. Joe, Wesche, approached me about going to a camp to try it out. I did, and I fell in love with it. What first attracted you to the drum corps activity? When I was in 7th grade, my brother was a senior and one day at a practice, it just so happened that Carolina Crown was staying at our school, and they had a hole to fill, so my brother packed his bags that night and went on tour with Crown. I went to three or four of his shows and that's when I was in "awe" of it all. At that moment, I knew I would be a part of a drum corps family. What advice would you give to young people who want to march? Don't be timid and scared. If you have a single thought about joining drum corps, you need to audition. Anywhere. It's a completely new environment, with 134 people you don't know, but in the end, it'll be the greatest thing to ever happen to you. Live it up. Be confident in yourself and you will succeed. What I want to be when I "grow up": I'm 18 and I'm supposed to know the answer to that? Wow. Reality check. I want to be a journalist and be able to take my own pictures for my work. Favorite drum corps personality and why: I would have to say my caption head, Mandy Bumgarner. I absolutely love her personality. She never gets mad, and even if she is attempting to be mad, it's still in the form of a smile. She's so energetic and happy, its hard not to smile back when she gets angry. She always has something positive to say and can always make you feel better when you're feeling down. Best drum corps show ever and why: Well, I've seen quite a few drum corps shows, but I guess if I had to narrow it down, I would have to pick Carolina Crown '99 because their horn line was awesome and I loved the color guard. The year is 2030. What does a DCI show look like? Completely retro! Electronic backdrops with pyrotechnics and uniform changes everywhere! It'll be pretty wild. Feel free to add anything else you'd like. I can honestly say that drum corps has been the best thing that has ever happened to me. I love it with all my heart, and every time I step onto the field, I give my heart and soul to the audience and their response is what makes my day complete. There's nothing better than being out on that big field with 134 members of your family, performing the life out of your show.

Some people ask me what I do all summer and my response is, "I spend three months traveling all over the U.S., waking up at 8 every morning, getting my butt kicked, and putting sweat and tears in to a 12-minute show." Then they ask me why I actually pay to do something like that. I don't respond, because no matter how hard I explain it, they'll never understand the reasons why I do what I do all summer. It's about passion for the activity, performing, and most of all, my family.

My family sometimes will ask if I'm ever interested in switching corps or anything like that. My answer every time is no. I do this not for the score or for the ranking but because I love my family and I can't leave them. They're all I've got and I wouldn't leave them for any other corps in the world, no matter how great they might be. Nothing is better than the family I have right now. I love you guys!