Name, age, hometown: Amy Dickinson, 20, Greenwood, Ind. What corps are you in and what is your role this summer? Boston Crusaders color guard Give us your full drum corps/marching music background. I marched Columbus North High School marching band and winter guard, before moving to Greenwood, where I continued on with my color guard career there. I was in the marching band and Irish guard. I then marched Capital Regiment 2002, 2003 and 2004. In 2004 I was named guard co-captain with Hollie Bailey. It was a fabulous time there, but it was time for me to move on. So with the encouragement of my lifetime mentor Marlieta Matthews, I went to a Boston Crusaders audition camp! I now am going to march with the Boston Crusaders in 2005! 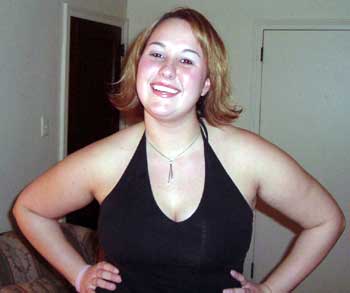 Amy Dickinson
What first attracted you to the drum corps activity? BOA Summer Symposium -- when I was like 15! I went, had a clinic with Gustavo (my fabulous caption head for two years) and I knew that I had to march! What advice would you give to young people who want to march? Go for it. There is no hurt in auditioning! I would start someplace small like a Division II or III corps, and then build from there. You may love it there, or you may want to march elsewhere. Color guard and drum corps is a game -- and it's all about how you choose to play! My number one rule is: Follow your heart. Don't let anyone tell you where to audition. Go where you want to go, because you have to pay the money and sweat for three months! Do you have any favorite road anecdotes? Um -- Icy/Hot before ensemble is always a good one, and one can never go wrong with Gold Bond! The last good book I read: "In Her Shoes" by Jennifer Weiner

The last great film I saw: Gosh -- "Napoleon Dynamite" Where I go to school and what I'm studying: I am currently not in school, I'm trying to figure out what I want to do with my life. Jobs I have/have had: I teach the Columbus North color guard. Go CNCG! Three CDs I'd want on a deserted island: Julie Roberts, Name that techno CD, and Dashboard Confessional My favorite TV show: "Newlyweds" Favorite performers: Everyone is my favorite performer. Every person in this activity should be given that title, because they work hard every season to put out a product they are proud of! How do you "blow off steam?" Call my best friend from high school -- Elizabeth VanHandle Best drum corps show ever: Cadets 2000 What has been your formative drum corps moment? Summer of 2002. We (Capital Regiment) were a fierce little Division II corps, with nothing stopping us. That summer was amazing! The summer of "rainbows and ponies!" The color guard staff made us into a pretty little piece of gossip! It was the group that never fought, and always wanted to get better! We were a Division II silver medalist, went Division I, performed at quarterfinals, and somehow by that grace of God made it on to semifinals. It was fabulous. I would go back and march that summer any day! What are you most looking forward to about the summer? A whole new marching experience, but most of all -- marching on finals night! Best thing about being in a drum corps: Making lifetime friends, and the hot tour bodies we all get! Worst thing about being in a drum corps: Being away from home forever During tour, the best part of the day is: Shower time! During tour, the worst part of the day is: The sound of the lights being turned on in the morning, followed by stretch and run. Favorite drum corps personality and why: Marlieta Matthews. She has taught me more than any of my other staff member ever has. She just has a way of touching a student's heart. And she never gives up on anyone! She will ride you until you board your plane to go home! What I want to be when I "grow up": I want to have a posh hair salon in Florida with my co-captain from 2004, Hollie Bailey. Describe what you think a typical DCI show will look in 2015. Probably a three-ring circus! I hope things don't change too much.