Name, age, hometown: My name is Bekah Aavang, and I am an 18-year-old from Huntley, Ill. What corps are you in and what is your role this summer? I am a proud member of the soprano line with the Glassmen. 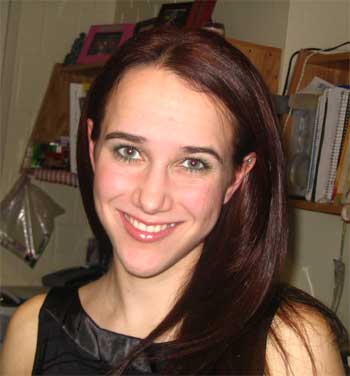 Bekah Aavang
Give us your full drum corps/marching music background. Unfortunately, my college does not have a football team. This means no marching bad for me. However, this is my rookie year in corps and I am very excited! How did you decide to be a member of your corps? One of my best friends aged out with the Glassmen last year. He took me to the first camp back in the fall and I was hooked. What first attracted you to the drum corps activity? My family used to attend a small show every summer in the town next to ours. At the time, I didn't really realize what I was seeing, but a few years ago, a good friend of mine who marched corps explained the activity to me. I've been learning more about this amazing activity ever since. What advice would you give to young people who want to march? If you are interested in the activity, go to a camp and give it a try! I waited until I was 18 to actually audition for a corps, but now I regret that I did not try sooner!

The last good book I read: I always read more than one book at a time, so that's hard to pinpoint. My favorites include "Catch-22" by Joseph Heller, the Lord of the Rings Trilogy, "The Hitchhiker's Guide to the Galaxy" by Douglas Adams, the Ender's Game series by Orson Scott Card -- yeah, I read a lot. The last great film I saw: "Eternal Sunshine of the Spotless Mind" Where I go to school and what I'm studying: I go to Bradley University in Peoria, Ill. I actually designed my own major, which is a combination of English, journalism and foreign language. Jobs I have/have had: Well, aside from babysitting, I worked in a steak house for a while -- which was interesting, because I am a vegetarian.

Favorite performers: Haha, I love watching the crazy antics of politicians! How do you "blow off steam?" I go for a nice long run or practice my trumpet.

Best drum corps show ever: I'm a big fan of 1996 and 2003 Phantom Regiment. What are you most looking forward to about the summer? Earning my very own outrageous tan lines and traveling around the country performing. Best thing about being in a drum corps: Being a performer instead of being a spectator.

Worst thing about being in a drum corps: Not being able to study abroad during the summer.

What I want to be when I "grow up": I would love to work for the Travel Channel, National Geographic, or BBC -- some kind of job that would pay me to write and travel would be amazing.

Describe what you think a typical DCI show will look in 2015. Very modern.