Name, age, hometown: Brendan Born, 19, Fort Wayne, Ind. What corps are you in and what is your role this summer? I will be marching as a second-year member of the Capital Regiment color guard. Where I go to school and what I'm studying: I am currently attending Indiana University-Purdue University Fort Wayne (IPFW) as a sophomore and working towards a degree in education and general studies with a minor in dance. 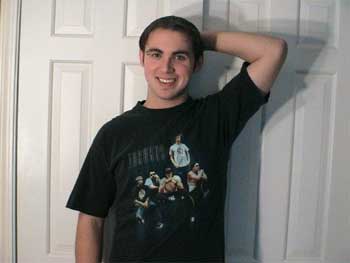 Brendan Born
Give us your full drum corps/marching music background: During high school, I was a mellophone player in the marching band for three seasons and performed in the winter guard for two. In 2003, I became the first and only male to have yet performed as a member of the color guard in the Snider High School Marching Band.
This is my second winter as a member of the Quest independent winter guard through the Quest Youth Project. My first Drum Corps experience was marching Capital Regiment in 2005.    What's your personal practice schedule like? I am in the habit of stretching every day and running a mile or two on the treadmill on a regular basis. I spin as often as I can. What does your ideal free day consist of? The best free day would include spending time in the wave pool at a water or theme park. I would also like to not be the last person to get his or her clothes clean and dry at the Laundromat! Favorite pig-out food: Graham crackers with milk. In the shower you can hear me singing: Coheed and Cambria. The last good book I read: "Jedi Trial (Star Wars: Clone Wars Novel)" by David Sherman. The last great film I saw: "Star Wars Episode 3: Revenge of the Sith" Jobs I have/have had: Color guard instructor, dishwasher. My favorite TV show: "That 70's Show" What has been your formative drum corps moment? Marching off the field in Gillette Stadium on semifinals night listening and feeling the audience. What would you be doing next summer if you were not marching? I would be working at a summer camp. How did you decide to be a member of your corps? I was motivated to attend an audition camp for the Cavaliers. Then I was given the advice to go to Capital Regiment. I really enjoy the feeling and energy of the Capital Regiment. What first attracted you to the drum corps activity? I became interested in drum corps during high school marching band. What advice would you give to young people who want to march? I would tell them to practice, organize and keep on truckin.' Best drum corps show ever and why: The show that I enjoy watching the most on tape is the Cadets 2003 show, with "Malaguena." I really love the music and the guard is fantastic. The year is 2030. What does a DCI show look like? The stands will always be packed with people that come to listen to the thunder of the drums and the sweetness of the brass, and that come to watch color guard members flying on jetpacks.