Name, age, hometown: Brian Forte, 20, Cheshire, Conn. What corps are you in and what is your role this summer? I am a member of the Cadets color guard. Where I go to school and what I'm studying: I'm a sophomore at Boston University, majoring in advertising and minoring in sociology. Give us your full drum corps/marching music background. I started color guard in the 8th grade in my school's winter guard program, and marched there for five years. I played mellophone in the Cheshire H.S. marching band for three years and was drum major my senior year. I started drum corps in the color guard of the Connecticut Hurricanes, where I marched 2002-2003. I've been in the Cadets since 2004, making this upcoming summer my third with the corps. Last winter I marched with the Blessed Sacrament world guard. 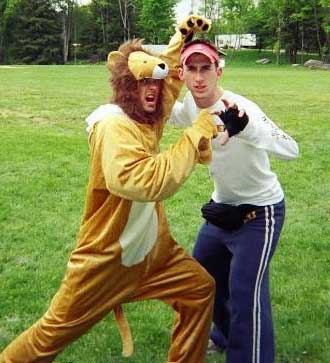 Brian Forte (right) and Cadets guard staffer Matt Winans (in lion suit).
What's your practice schedule like? I'm not marching this winter -- so my practice schedule (for once) is a little toned down. Over winter break I am teaching my middle school's winter guard, so that has me spinning and dancing three or four days a week. Next semester I'll be taking a dance class that will keep me in shape for the summer. And I go out in my yard and spin whenever I can (which gets a little tricky when I'm at school and living in the middle of Boston). What does your ideal free day consist of? Hmmm, let's see. Waking up around 10, getting into some 'real people' clothes and going to a restaurant (Cheesecake Factory is definitely a plus). Then walking around (preferably not in a monsoon like our Disney World free day in
'05) and not thinking about drum corps. Favorite pig-out food: On tour I become obsessed with Sour Patch Kids and Dr Pepper. Oh -- and it wouldn't be drum corps if you didn't have Starburst. In the shower you can hear me singing: Well, in 2004 you would hear me singing 'Songs from the Wood' by Jethro Tull because April made us learn all the words. Although, I still don't think I know all of them. "Let me bring you songs from the wooooooood ... " The last good book I read: "Wicked" by Gregory Maguire. The last great film I saw: "Brokeback Mountain" Jobs I have/have had: I teach the Cheshire High School "A" guard and work at a credit union during winter break. At school I am an office assistant at the BU department of electrical and computer engineering (I know, it's a really long name). My favorite TV show: "Lost" What has been your formative drum corps moment? The victory run in 2005 was such an incredible experience. We were given the opportunity to take the field one last time and perform a show that meant so much to all of us. There was no pressure and it was one of the most fun performances of my life. What would you be doing next summer if you were not marching?
Working and thinking about drum corps, or maybe teaching at the Fred J. Miller clinics. How did you decide to be a member of your corps? I always saw the Cadets as a machine, always achieving incredible things that no one else would even think about trying. This always intimidated me and I never thought I would be able to march there. Then in high school I was taught by a few former and current Cadets who convinced me that it was the place for me. What first attracted you to the drum corps activity? The idea of performing night after night and traveling the country with some of the greatest people you could ever meet. What advice would you give to young people who want to march? Do it! Don't wait! Go to an audition and see what happens –- and never stop trying. What I want to be when I "grow up": An art director in an advertising agency. Favorite drum corps personality and why: Definitely April Gilligan. She is such an incredible instructor and pushes us to be better than we thought possible. April also knows how to make a color guard come together as a group and teaches us that teamwork is essential for success -- probably one of the most important things I've learned in drum corps. Best drum corps show ever and why: I can't decide which show is the absolute best, so I'm going to cheat and put down a list: Cadets '89, '93, '98, '00, '01, '05 (a lil' bias in there); Phantom Regiment '03; Star '93; Blue Devils '01. The year is 2030. What does a DCI show look like? I have no idea. I just know I'll go to shows and wish I could be out there performing (and be tan and skinny again, of course). Feel free to add anything else you'd like. The picture I am attaching is from spring training in 2005 at Camp Cayuga in Pa. We found a lion suit in one of the cabins. This is me and "the lion" (a.k.a. guard staff Matt) after it attacked us during sectionals one day.