Name, age, hometown: Brooke Dailey, 20, Daphne, Ala. What corps are you in and what is your role this summer? Spirit, color guard Give us your full drum corps/marching music background. I was in the color guard and winter guard at Daphne High School from fall '98 to spring '02 where I was guard captain my senior year. I started marching with Spirit in 2003 after my first year of college. Since I've been in college I've been marching with the University of Alabama Million Dollar Band and I serve as the weapon captain. 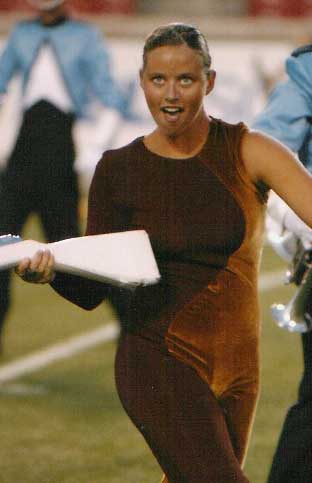 Brooke Dailey
How did you decide to be a member of your corps? I was very restricted by location when I first started searching for a corps to march with, but after auditioning for Spirit I had the best of both worlds. It's only two hours away and it's a family to me like no other. What first attracted you to the drum corps activity? I was first introduced to drum corps by my mother in 1989. I was only 5 then, but I still remember watching the Santa Clara Vanguard make their entire corps "disappear" on finals night and I couldn't tear my eyes from the field. What advice would you give to young people who want to march? It's all about attitude. Always remember that you can never be done learning and growing as a person. And from a guard standpoint, if you're auditioning you have to make sure you are seen. Jump up there and show them that you are confident enough to wow a stadium full of people. Do you have any favorite road anecdotes? Well I hate wearing my tennis shoes when I'm on the bus so flip-flops are the only choice for me, but my feet always get cold. So while my mom was visiting me during an off day in New Orleans in '03 I told her about my freezing feet problem. She had an instant solution, of course, and that night I got on the bus with three pairs of multicolored toe socks. Now I can keep my feet warm and still wear my flip flops! The last good book I read: I'm on the seventh book of the "Left Behind" series. The first six were great. The last great film I saw: "Fight Club," only because I watched it for the first time a few weeks ago and thought it was extremely well done. Where I go to school and what I'm studying: The University of Alabama, aerospace engineering Jobs I have/have had: I used to work at a Marble Slab Creamery -- who doesn't love ice cream? Three CDs I'd want on a deserted island: Tori Amos,
"Tales of a Librarian" collection; Evanescence, "Fallen"; and "The Last Samurai" soundtrack. My favorite TV show: Any version of "Law and Order" Favorite performers: Orlando Bloom, Harrison Ford,
Russell Crowe and Demi Moore. How do you "blow off steam?" Honestly, I throw fives with my rifle until I can't feel my hands anymore. Works every time. What has been your formative drum corps moment? Walking off the field on semifinals night in 2003 when we were all so sure that we had just completed our last performance. I've never felt so close to a group of people in all my life and I have yet to shed such meaningful tears since that moment. Best drum corps show ever: The Cavaliers, 2000,
"Niagra Falls" (Cavies '95 is really good too!). What are you most looking forward to about the summer? I love the music we're playing, but I'd be lying if I didn't say that what makes me remember why I come back every year is listening to the horn line play "Georgia." Such power and emotion is enough to knock anyone over, and it means just that much more for those of us who live and breathe it everyday. Best thing about being in a drum corps: Walking out on a field knowing that almost every single person in those stands dreams about being on that field with me. Then I can stop and think to myself "I'm living a dream!" Worst thing about being in a drum corps: I love how tan parts of me get, but then I'm always so embarrassed if I have to put on a bathing suit when I get off tour. During tour, the best part of the day is: Right when you get off the field after a show. No more nervousness for the night, just eating and individual practice time. During tour, the worst part of the day is: Waking up -- definitely. Favorite drum corps personality and why: I'm honestly going to have to say our corps director Ken Bodiford (I'm not sucking up I swear!). He's never stopped believing in us and he's just witty enough to get me laughing when I'm having a rough day. What I want to be when I "grow up": Well hopefully I'll be an aerospace engineer, but I'm intrigued with companies such as Lockheed Martin and Boeing. Describe what you think a typical DCI show will look in 2015. Well that's only 10 years away so let's see. So many people seem to be fighting to keep drum corps as traditional as possible and yet we still want new ideas and original creations. However, if things keep changing the way the have been we might be seeing some new instruments on the field and most definitely in the pit. I'm sure there will also be some interesting new guard equipment. Each year a corps brings out something new and inventive. It should be great fun to see how it all progresses. Feel free to add anything else you'd like. Our show this year is entitled the "Spirit of Broadway," and with a title like that I absolutely can't wait to perform it. I've always been a lover of Broadway and I'm up to the challenge of trying to make it as realistic as possible.