Name, age, hometown: My name is Christopher Scott Forster. I am 21 years old. I am from Menomonie, Wis. What corps are you in and what is your role this summer? Madison Scouts, I am a vet in the mellophone line. 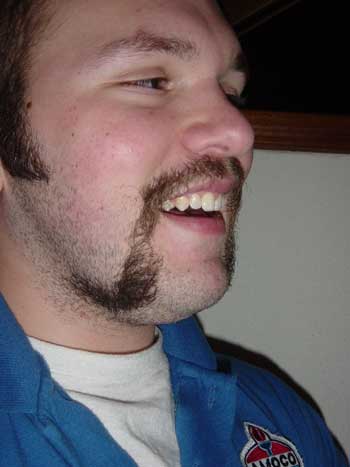 Chris Forster
Give us your full drum corps/marching music background. I marched with Capital Sound in 2001 and 2003. I marched Scouts in 2004 and this year. Four years of high school marching band, stock. How did you decide to be a member of your corps? While I was in Capital Sound, we were at a lot of shows that the Scouts were at. Their shows were the most amazing thing ever, and seeing them night after night really made me want to be a part of that. What first attracted you to the drum corps activity? I had a friend or two in high school that had marched in Capital Sound drag me along to a camp, and I was hooked from there. What advice would you give to young people who want to march? Do it as soon as you can and as long as you can. The last good book I read: "Tricky Business" by Dave Barry. He's funny. The last great film I saw: "The Big Lebowski" Where I go to school and what I'm studying, if applicable: I am not going to school this semester. But when I am in school, I am at the University of Wisconsin-Stout, studying manufacturing management. Jobs I have/have had: I have had one job. I work for my parents and they own an iron foundry. It's been in our family for 107 years. Three albums I'd want on a deserted island: "Rockin the Suburbs" by Ben Folds Five, "Madison Scouts -- Through the Years," "Hello Nasty" by the Beastie Boys. My favorite TV show: "Arrested Development" Favorite performers: 311, Beastie Boys
How do you "blow off steam?" Clean my house, there is always something in need of cleaning. What has been your formative drum corps moment? Finals night last year, when I realized that this is what I have been bustin' tail for for the last 7 months. The stadium was pretty sweet, too. Best drum corps show ever: 1981 Madison Scouts. What are you most looking forward to about the summer? Our first show on June 17th. There's something about the first show that is awesome (this interview was submitted in March)). Best thing about being in a drum corps: The best thing about being in Capital Sound and the Scouts for me has been the amazing bonds I have made with everyone in both corps. It's good to know that I will always have someone to talk to. Worst thing about being in a drum corps: I hate sleeping on the floor, but it is something you get used to. During tour, the best part of the day is: Breathing block. During tour, the worst part of the day is: Breathing block. Favorite drum corps personality and why: Matt Gregg was Cap Sound's director in 2001 and the first person I looked up to in drum corps. Ihanks Matt. What I want to be when I "grow up": I am probably going to end up running the family business. Describe what you think a typical DCI show will look in 2015. Rocket packs = 3-D drill.