Name, age, hometown: Chris Tanner, 18 years old, Green Bay, Wis. What corps are you in and what is your role this summer? I am a member of the Colts. I am currently in the cymbal line in a "co-section leader"-esque position, also as the drum line veteran with the most years. So whatever position that puts me in (no formal announcements made yet). Give us your full drum corps/marching music background. I marched Americanos from 1999-2002 marching two years of cymbals and two years of bass drum and am entering my third summer with the Colts on cymbals. 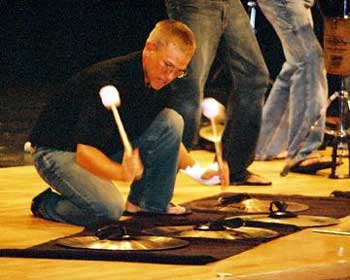 Chris Tanner
How did you decide to be a member of your corps? I was brought in by a member who I marched Americanos with. He told me about the family environment of Colts and the way the organization was run, and immediately I was interested. What first attracted you to the drum corps activity? I was born into the activity. My first show was pretty much right when I was born. According to my parents, we had nightly "jam sessions" around my mother when she was pregnant with me, just so drummers from Phantom Regiment could see me kick while they played and stop when they stopped. What advice would you give to young people who want to march? Don't be afraid, and don't get too tense. You are stepping into a room, as Greg Orwoll would say, "Where you will meet your best friends, and possibly your future spouse." Do you have any favorite road anecdotes? Last year we were doing our "cornfield" tour. We stayed in West Liberty, Iowa, home of the most bugs in the world. Going to ensemble was about a 15-minute trek from the school. We did not want to be bitten, so we put on as many clothes as we could, with T-shirts over our faces. Everything we had was on. So as the cymbal line walked on the field about two minutes before ensemble, the guard was rehearsing. We literally had the entire flag line stop doing work and start laughing at us. We even have video footage of nearly everyone in the corps laughing at us, and the cymbals were just saying "Laugh it up but we will see who gets the last laugh." You could see NOTHING but our eyes. We were later deemed the "Terrorist Cymbal Line." But lo and behold, the next day before ensemble, nearly every member of the corps had a T-shirt over the face, and they were ready for the wall of bugs. The last good book I read: "River of Champions" The last great film I saw: "Miracle" Where I go to school: The University of Wisconsin-Whitewater. Jobs I have/have had: I am an ice hockey official. Two albums I'd want on a deserted island: My "drum corps remix" CD, Andrew W.K. (the one I always stole last summer). My favorite TV show: "Family Guy" Favorite performers: One of our snare drummers, Adam. He and I jam out all the time during warmup and ensemble, that kid is always performing. How do you "blow off steam?" Ha -- now, or before? Now mostly I let things out in my performance, or I will let it out with a run. Before, man, it was bad if you knew me and I was upset. Best drum corps show ever: 1993 Phantom Regiment What are you most looking forward to about the summer? Both the family environment of the Colts and my drill! So far, I and a mello buddy of mine have some pretty sweet drill. Best thing about being in a drum corps: The family. Worst thing about being in a drum corps: Waiting in line for food (especially when people cut). During tour, the best part of the day is: Ensemble during tour, During tour, the worst part of the day is: Drum line roll strolls. Favorite drum corps personality and why: (DCI executive director) Dan Acheson, he has shown me a lot about the organization as well as shown me a lot about the activity and what it is truly about. He helped me out even during a stressful time for himself where other people would have left. What I want to be when I "grow up": Successful. Working for a sports organization or officiating hockey. Describe what you think a typical DCI show will look in 2015. Fairly close to what I see on the field today. There is too much tradition in drum corps to allow it to go much further than what it is now. DCI has made the activity great, and I believe that people will begin to see that drum corps is different in itself, and deep down I think they will keep it pretty similar to what it is like right now. Feel free to add anything else you'd like. Drum corps is tough, and I thought it had changed me before. Members are what make up the activity. The family, the traditions, the laughs. Without it, I cannot even imagine. The relationships you formulate in drum corps are ones you will NEVER have anywhere else. Over this last off-season, drum corps has completely changed my life. I thought it had before, as many people do. Believe it, just as your staff tells you to believe and trust that everyone around you will do his job. You have to formulate that into the real world. It took me 18 years to put the two together, and cost me a great thing. Believe. Believe in yourself, and believe in your fellow brothers and sisters.