Name, age, hometown: Christine Marie Garringer, 20 yrs. old, St. Henry, Ohio What corps are you in and what is your role this summer? I am marching mellophone in the Glassmen horn line. 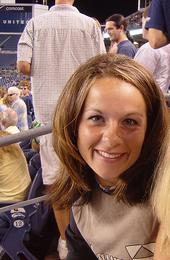 Christine Garringer
Give us your full drum corps/marching music background. I marched in my high school band and was drum major for three years. While at college, I also marched in the Bowling Green State University
Falcon Marching Band. The past two summers I was a drum major instructor for the Fred J. Miller clinics. How did you decide to be a member of your corps? I saw my first drum corps show when I was in the 6th grade. It was the Soaring Sounds show in Centerville, Ohio, and I fell in love with the Glassmen. I have always thought of marching here and finally just made it happen. What first attracted you to the drum corps activity? Drum corps is so intense on so many different levels. The excitement of the performance and the demand of the music is what first drew me in. What advice would you give to young people who want to march? JUST DO IT! Don't put it off and tell yourself "Well, maybe next year." Be sure to have an open mind and take in everything thrown at you. The last good book I read: I am currently reading "Many Lives, Many Masters" by Dr. Brian Weiss. The last great film I saw: "Sideways." It made we want to be old and a professional wine taster. Where I go to school and what I'm studying, if applicable: I am currently studying music education at Bowling Green State University, but am in the process of transferring out to New York City to study vocal performance. Jobs I have/have had: My not-so-fun high school job was at McDonald's and being a waitress at a local diner. The most amazing job I had was being an instructor for the Fred J. Miller clinics. Three CDs I'd want on a deserted island: CDs? Just take an IPod and the problem will be solved. You gotta have a bit of everything – '80s, '90s, rap, classical, jazz, blues, drum corps, crazy DJs, and all that. My favorite TV show: I don't watch a lot of TV, but when I get the chance, I like "I love the '70s," "I love the '80s," and "I love the '90s." Also, "Aqua Teen Hunger Force." Professional wrestling is always good for a laugh. Favorite performers: Renee Fleming and Cecilia Bartoli. How do you "blow off steam?" I work out or practice (voice or horn). What has been your formative drum corps moment? Since this is my first year, I'm just enjoying the pre-summer fun: Learning music and drill, watching the corps form as a family, etc. The summer will be the biggest test and I'm so ready for the school year to end and an amazing summer with the Glassmen to kick in. Best drum corps show ever: Wow -- there are too many. I've always liked SCV and Glassmen. I like Glassmen 2001 and 2002. What are you most looking forward to about the summer? Finally doing what I've always wanted to do. I can't wait to get on the road, do shows, and watch the corps come together. Best thing about being in a drum corps: Marching with a family. Worst thing about being in a drum corps: You just get through the rough times. Favorite drum corps personality and why: Chris Hestin, Glassmen percussion tech. He knows his stuff and is very down to earth. He's an amazing writer and I love what he puts on the field. What I want to be when I "grow up": I want to be a performer -- stage, theater, opera house or wherever. I want to perform. Describe what you think a typical DCI show will look in 2015. New and innovative. Pushing the envelope and going beyond the norm.   Writing completely original shows so that it has never been seen or doesn't resemble past shows. Which probably means more notes and drill sets.