Name, age, hometown: Courtney Lawrence, 19, Houston. What corps are you in and what is your role this summer? I play third euphonium in the Phantom Regiment. Where I go to school and what I'm studying: I am a freshman at the University of Houston, majoring in music education. 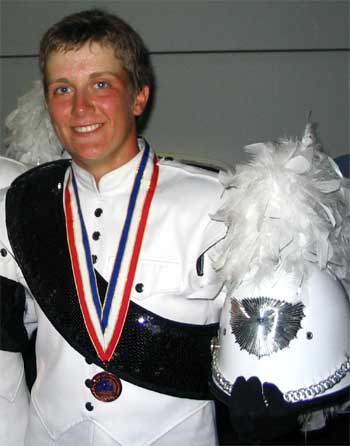 Courtney Lawrence
Give us your full drum corps/marching music background. I played trombone in the Clear Brook High School Wolverine band for two years, and served as drum major for two years. I now play trombone in the Spirit of Houston Cougar Marching Band, though my primary instrument is saxophone. I filled a soprano hole in the Colts in 2003, and played euphonium in the Phantom Regiment in 2004 and 2005. What's your practice schedule like? On tour? All day, every day. At home? Not nearly as much as I should. What does your ideal free day consist of? Plenty of time to just relax and spend time with my buddies in a stress-free environment. Spend lots of money on a great steak. Or get a free meal at the Beef-a-Roo. Favorite pig-out food: Brownies, cookies, pizza. In the shower you can hear me singing: Mmm -- not so much. The last good book I read: "Angels & Demons" by Dan Brown. The last great film I saw: "Jarhead" Jobs I have/have had: Music and visual tech for Clear Brook High School, private saxophone instructor. My favorite TV show: "24," "Lost," "Alias" What has been your formative drum corps moment? It happened before the Allentown show this past summer. We stayed a few blocks from the stadium (J. Birney Crum!), and walked there and rehearsed on a field next to it. There were a lot of people watching, which was a big hype. We had an amazing pre-show warmup, with great motivational talks by both Dwight and JD. Marching to the stadium was incredible. Everything was just perfect. We had a great show, and were definitely pushing together toward finals. What would you be doing next summer if you were not marching? Sulking at home, wishing I were marching. What first attracted you to the drum corps activity? Before 2003, I didn't know anything about drum corps. We got a new band director who has worked with a few corps in the past. He had the Colts stay at my high school after the San Antonio show, and they had a soprano hole. My director said he wanted me to fill it, so I watched them rehearse, and shipped out that night. I had three weeks to get used to the life, learn the show, and see other corps. How did you decide to be a member of your corps? In Hornell, N.Y., in 2003, a bunch of us were late to retreat block because we were watching Phantom Regiment perform "Harmonic Journey." I fell in love. The low brass blew me away. The powerful white uniforms -- I knew, right then and there, that someday, I would march in that corps. What advice would you give to young people who want to march? Don't let yourself be intimidated by anyone. Be confident that you are prepared and that you deserve to be in the corps, and just keep showing up until they tell you to leave. What I want to be when I "grow up": I'd like to be a high school band director, still staying involved in the drum corps scene. Maybe join a military band before then. We'll see. Favorite drum corps personality and why: J.D. Shaw. His brass arrangements are brilliant. He continues to outdo himself year after year. And he's an amazing performer with Boston Brass. Best drum corps show ever and why: I've tried, and I can't narrow it down to just one. In no particular order: Phantom Regiment '89, '91, '93, '96. Vanguard '89.