Name, age: Danell Nelson, 17 What corps are you in and what is your role this summer? Santa Clara Vanguard, color guard. 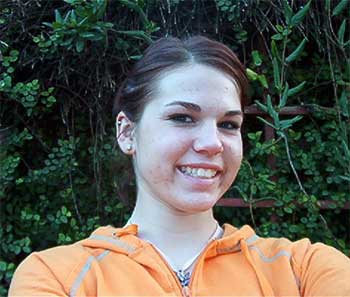 Danell Nelson
Give us your full drum corps/marching music background. Clovis West High School marching band and Santa Clara Vanguard Cadets, 2004. How did you decide to be a member of your corps? The tradition and history of the Vanguard program. What first attracted you to the drum corps activity? Watching the 2001 DCI championships video as a little freshman doing my first field show. I wanted to be part of something big like that, that could take a huge stadium and fill it up. What advice would you give to young people who want to march? Get rid of fear, it will only hold you back. Be determined and relentless in the path you want to go. The last good book I read: "The Tao of Pooh" The last great film I saw: "Eternal Sunshine of the Spotless Mind" Where I go to school and what I'm studying, if applicable: Clovis West High School. Three albums I'd want on a deserted island: Alicia Keys, Outkast and Jason Mraz. My favorite TV show: "Seinfeld" and "Curb Your Enthusiasm" How do you "blow off steam?" I spin or dance. What has been your formative drum corps moment? Hearing SCV play "Send in the Clowns." Best drum corps show ever: Prescott Valley, Ariz. It was pouring so the show got delayed. We had to wait on the bus until the rain settled down. When it finally did we all got off the bus and walked onto the field. There was this crazy energy that spread throughout the corps. It gave the show a whole new vibe and life. What are you most looking forward to about the summer? Performing with the A-corps, meeting new people, and traveling. Best thing about being in a drum corps: The bonds you make and the audiences you are able to reach. Worst thing about being in a drum corps: Sleeping through rest stops, having to say goodbye to all you drum corps buddies, and -- tan lines. During tour, the best part of the day is: The morning stretch. During tour, the worst part of the day is: Loading all the equipment on the truck right after a run-through. What I want to be when I "grow up": A dancer or color guard instructor. Describe what you think a typical DCI show will look in 2015. Hmm. I don't know -- should be interesting though!