What corps are you in and what is your role this summer? Phantom Regiment, mellophone player (lead part). 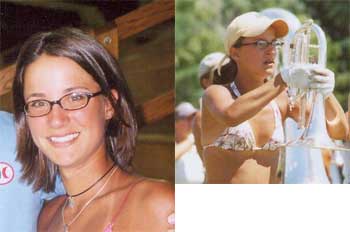 Emily Fetcho
Give us your full drum corps/marching music background. Pioneer, Milwaukee, Wis., mellophone 2003 and 2004. Fremd high school marching band for three years. How did you decide to be a member of your corps? By chance -- I was lucky. My parents convinced me to audition in November and at the end of camp, I was called back for December. I decided it was an opportunity that I had to take to both improve and challenge myself. What first attracted you to the drum corps activity? I was a HUGE fan in 2002 -- that was the first summer that I was introduced to corps. My mom was a huge corps nut and just apparently overlooked that she hadn't introduced me to the activity! We went to DCM at Northern, the Cavies home show, and finals in Madison that summer. My best friend, Jeremy Figlewicz (now a Phantom Euphonium), marched with Pioneer and he brought me to my first camp in the fall of 2003. There's been no looking back since then! What advice would you give to young people who want to march? Go out and give it a try. You just have to jump in feet first and really want to be a part of a corps in order to succeed. Also, don't be afraid to check out all the options, like a Division II corps or a smaller Division I corps. I wouldn't be in Regiment this year if it wasn't for my previous experiences -- and I'm grateful I've had them! The last good book I read: "Me Talk Pretty One Day" by David Sedaris or "The Kite Runner" by Khaled Hosseini. The last great film I saw: "He Loves Me, He Loves Me Not," which is a suspenseful, twisted French film with Audrey Tautou of "Amelie" in it. Let me just say that you will not believe the ending -- I never saw it coming.

Where I go to school and what I'm studying: Right now I am a senior at William Fremd High School in Palatine, Ill. Next year I am planning to study music education (vocal and instrumental) at either Butler University or the University of North Texas -- I just have to pick one. Three CDs I'd want on a deserted island: The "Garden State" soundtrack, 2003 DCI Finals Disc 1, and Coheed and Cambria's "In Keeping Secrets of Silent Earth: 3." An eclectic mix, I know!

Favorite performers: In what sense? I'll go a little out of the norm here and say some of my favorite Broadway stars -- Idina Menzel, Nathan Lane, Harvey Fierstein and Kristen Chenoweth.

How do you "blow off steam?" Drive in my car with the windows down and blast drum corps shows as loud as I can.

What has been your formative drum corps moment? My favorite so far was my very first show in 2003. I remember the first steps I took and thinking to myself, "You have to remember this forever because it begins a lifetime of great memories."

Best drum corps show ever: Oh my gosh, how to choose. OK, I'll choose my favorite from the years that I've marched -- Phantom Regiment 2003 (OK, so I might have a slight bias) or Santa Clara 2004. Both were original and so enjoyable to watch.

What are you most looking forward to about the summer? Getting the chance to go out and create something wonderful with a great group of people. I have already met so many new people that I get even more and more excited each camp. I just love that 11 minutes of our lives can become so defined and all-encompassing. Drum corps is a learning experience every summer and I can't wait to see what I'll learn about life and myself this summer. Oh, and the tan is a nice perk too!

Best thing about being in a drum corps: The food and stepping onto the field in front of all the screaming fans going crazy for YOU. It's the closest I'll ever come to being a rock star.

Worst thing about being in a drum corps: Dirty laundry and five-hour rehearsal blocks. During tour, the best part of the day is: The final run-through of the day. During tour, the worst part of the day is: When you first wake up and you ask yourself why you are involved in this activity. Then, after a few days or so, you grow out of that and just drag your aching body out to another wonderful day of sunshine and music. Favorite drum corps personality and why: There are so many people at Regiment that I need to meet and put names with faces. But two people that stand out to me over my whole corps experience are Mickey Hartzog and Pat Seidling. Mickey was tough on me in 2003, but only because he wanted to make me better (and let me tell you, I needed it!). He has become a great friend and mentor to me during my years with Pioneer and I know that I can always call him if I need to. I really respect Pat Seidling a lot. How he manages to run a corps and still remember who everyone in Regiment is, is beyond me. He'll come and talk to you about anything and you can always count on him to give you a straight and honest answer.

Describe what you think a typical DCI show will look in 2015. Though I think that corps will generally be the same, just more inventive, I'll throw out an idea that we were tossing around at camp this past weekend just for fun. Everyone on the field either has a jet pack or one of those two-wheel motorized-scooter things and you just plug your coordinates in it and then all you have to do is play while it scoots you around! That would be something.