What corps are you in and what is your role this summer? I am a member of the Glassmen, and I am in the color guard. Where I go to school and what I'm studying: I go to a community college right now. I really don't know what I want to do yet. I do know I don't want a scheduled life, doing the same thing everyday. When I find something that doesn't fall into that category and interests me as well, I suppose I'll look into it. 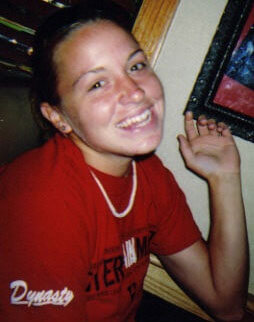 Emily McKay
What's your practice schedule like? Six in the afternoon or two in the morning. I guess whenever I feel like spinning, I practice.

What does your ideal free day consist of? Sleeping! I always enjoy going to an amusement park, but as long as I get sleep, I'm a happy camper.

In the shower you can hear me singing: Probably the part of the show we had worked on the most in rehearsal.

The last good book I read: Book? Give me the tape and some headphones!

Jobs I have/have had: I worked at Chipotle until I left for tour in 2004. I'm currently a happy associate at Finish Line. Discount on sneeks for the summer, and I learn what works best for drum corps.

What has been your favorite drum corps moment? Aw, that's tough. I think it's a tie between my first finals performance in DCI and Allentown 2004 with the rain pouring down the first time around.

What would you be doing next summer if you were not marching? Wishing I was marching.

What first attracted you to the drum corps activity? There was a drum corps audition at my high school the same day I had a guard rehearsal. As I was leaving, I saw the color guard and was speechless. I was only a sophomore so I had never seen anything like that before. I stayed and watched them rehearse until 11 at night and knew from that day on, I wanted to do whatever they did to get that good.

What advice would you give to young people who want to march? Do it now. Don't wait and say you have so many more years. Honestly, how many people can say they toured around the country doing what they love when they were 16?

What I want to be when I "grow up": I've always wanted to be in "Blast" or something like it. I have much more to learn before that though.

Favorite drum corps personality and why: That would be Tim Newburn. He always has a different way of looking at things. He teaches in a way that opens up my mind and allows me to explore a whole new level of guard. People think guard is as simple as a curtain rod with some fabric, a chunk of a tree and some bent metal, but it's really not. There is so much more to it. Tim makes sure you know that and understand it. Once I think I've learned it all, he has something more to teach me. I love it.

Best drum corps show ever and why: I'm in guard, so that's mostly what I watch, keep that in mind. On the entertainment side, I loved 1990 Velvet Knights, but I find almost anything from that era entertaining. As far as just being good, Cadets 2003. Running that much and still being clean, two words: get it.

The year is 2030. What does a DCI show look like? If drum corps were to follow the trends of fashion, then it would be going backward. Things that they did in the 1980s would come back to the field, but with a modern day twist. Sort of like flare jeans? Feel free to add anything else you'd like. The end.