Name, age, hometown: My name is Erik McCrossen. I am 17 and I live in Rocklin, Calif. What corps are you in and what is your role this summer? I am in the Mandarins on the tuba line. Where I go to school and what I'm studying: I go to Rocklin High School where I taking general education courses. 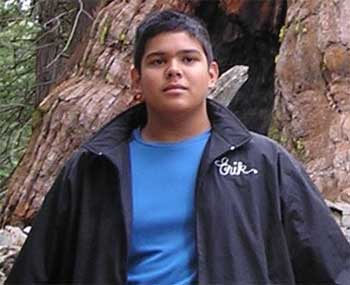 Erik McCrossen
Give us your full drum corps/marching music background. I marched in the Mandarins in '05. What's your practice schedule like? I try to practice when I can. My schoolwork is sometimes a little overwhelming and prevents me from having a regular practice schedule. But if I have some free time at all, I will practice. What does your ideal free day consist of? My ideal free day consists of shopping, eating and seeing some sights, as well as being with some of my friends. Favorite pig-out food: Good Chinese food. I love Chinese food. In the shower you can hear me singing: Tunes from our show for the season. The last good book I read: "The Catcher in the Rye" by J.D. Salinger The last great film I saw: "King Kong" Jobs I have/have had: I have never had a paying job before. My favorite TV show: "Seinfeld" What has been your formative drum corps moment? Just finishing the show, hearing the crowds screaming and applauding after giving it my all. Trying my very hardest to perform of the show to the fullest extent of my abilities and demonstrating what I've learned and been practicing for the past many months. What would you be doing next summer if you were not marching? Nothing at all, maybe working. How did you decide to be a member of your corps? The Mandarins were relatively local, since Sacramento is a little more than half an hour from Rocklin. I thought I'd give it a shot. And I loved it from the start. What first attracted you to the drum corps activity? I first learned about Mandarins and drum corps after attending the Stockton show at UOP in '03. I was totally blown away by all of the performances. Although it wasn't until '05 when I decided to march, I told myself then that I may be doing this someday. What advice would you give to young people who want to march? If you absolutely want to march, find a corps and do it. The activity of drum corps is totally unique and absolutely worthwhile. What I want to be when I "grow up": Haven't decided yet. The marching band director at Fresno State, Gary Gilroy, was both my parents' band director in high school and will offer me a scholarship if I go to Fresno for a music degree. Or I may go to Sac State or San Jose State for a technology career. Favorite drum corps personality and why: Nate Brown. He is on the brass and visual staff and focuses on us, the tubas. He's just a great instructor. He's fun to be with, he's smart, and he's very tough, like he would make us do 8's and 8's across the field after practice every night, whether we did something wrong in the practice or not. He's definitely a person that has good reason to be feared, but he's just a wonderful person as well. Best drum corps show ever and why: Mandarins '03 show. It was the first show I ever saw and got me interested in the activity. The year is 2030. What does a DCI show look like? Generally how shows are today. There will probably be different uniforms and faster, with more complicated drill, though.