Name, age, hometown: Garrett M. Dillon, 18, Virginia Beach, Va. What corps are you in and what is your role this summer? I am returning to the Crossmen this summer. My role with the Crossmen won't be an official leadership role, but as a third-year returning member, being a role model and demonstrating exemplary rehearsal etiquette is important. Where I go to school and what I'm studying: I go to Old Dominion University in Norfolk, Va. Currently I'm studying business with a concentration in either management or marketing (haven't decided yet). 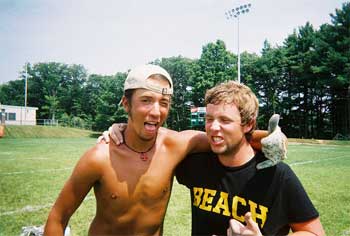 Garrett Dillion (left) and Shane Reider.
Give us your full drum corps/marching music background. I started marching band in 9th grade. My high school band's marching program wasn't anything spectacular, but the director and certain key people in the program served as motivation and support to get me involved in drum corps. One of my good friends two years ahead of me marched in Carolina Crown for two years. The first drum corps show I ever saw was at Nightbeat in '01. I went to see him perform. Once I learned that drum corps was living on a bus and driving around the country performing all summer, I knew I had to be a part of it. I ended up marching Crossmen in '03, I almost marched in '04 (long story) and '05. What's your practice schedule like? Practice? What? What does your ideal free day consist of? The free days in Virginia Beach were always excellent, especially because it's my home town. Don't tell Larry this, but at our free day in '05 at Virginia Beach, I got into my friend's car and we drove around the strip (he told us not to get into anyone's car, even our own parents' cars!). Favorite pig-out food: Monterey chicken taquitos from 7-11. But only at 2 a.m. on a weekend after a long night of "socializing". In the shower you can hear me singing: Shower? What? The last good book I read: "Walter the Farting Dog" (a cute children's book by William Kotzwinkle) The last great film I saw: "Requiem for a Dream" Jobs I have/have had: Cooking at a local restaurant at the beach. My favorite TV show: "Family Guy" What has been your formative drum corps moment? This past summer, I strained a muscle in my leg right near my ankle and it put me out of rehearsal for a couple days. During the course of tour, after what seems like an infinite amount of hot rehearsal days, it's easy to feel apathetic about rehearsing and it's easy to complain about how hot or how tired you are. But sitting in the end zone while all of my friends were out there working hard almost made me feel guilty. The day that I got up and jumped back into rehearsal, I was filled with a new energetic spirit and a new passion to be back alongside my friends. At the end of that day's ensemble rehearsal, I was having the best run-through of my life, but we got rained out by a massive thunderstorm. What would you be doing next summer if you were not marching? Working most likely, maybe taking summer classes. How did you decide to be a member of your corps? I chose the Crossmen because we know how to throw down every night. And the next night, we just throw down even harder. The fans love us, too. Anyone who marches DCI can tell you that there is no greater feeling that thousands of fans screaming and yelling and throwing babies because you just ripped their faces off. What first attracted you to the drum corps activity? When I heard that drum corps was riding around on a bus all summer performing, I had to be a part of that. What advice would you give to young people who want to march? Never give up. Go to auditions. If they tell you to come back next year, go home and practice and come back next camp. If they see that you are working hard to improve, that will attract them more because they know that you want it, and you will work for it. What I want to be when I "grow up": I want to have my own business. Favorite drum corps personality and why: I have a few. I have to say Adam Farley. Adam marched Crossmen '02-'05 and has been an inspiration to me, as a musician, marcher and as a person. Adam Farley is one of my favorite people ever. Next on my list is Juzeh Correia. Juzeh marched Crossmen '02-'05 and he has also been an inspiration to me. He's a living, breathing definition of what a Crossmen should be, in every aspect. Next is Becky Terry. Becky marched Crossmen for nine years. Nine years! The long and short of it is, Becky Terry is flippin' amazing all the way down to the core of her being. Aaron Goldberg is last on my list. Aaron marched a few years at Crossmen and was the baritone soloist in '01 when he aged out. He's been the baritone tech ever since. Aaron is an excellent teacher, and an even better friend. I hope I never lose touch with him. Aaron's mom is pretty cool too. Best drum corps show ever and why: There are really too many to have to pick one. I really like Crossmen '92, Crossmen '03 and Cavaliers '01. The year is 2030. What does a DCI show look like? Freakin' sweet. Feel free to add anything else you'd like. Another one of my favorite drum corps personalities is my seat partner from '05, Ned, just because he's one of the funniest dudes I know.