Name, age, hometown:
Jalissa Ann Bishop, 17, Richfield, Wis. What corps are you in and what is your role this summer?
I am a member of Pioneer's color guard. Where I go to school and what I'm studying:
I'm still in high school. I attend Hartford Union High School. I'm planning on going to Madison to study business after high school. Give us your full drum corps/marching music background:
Hartford High School Marching Band 2004-2006 and Pioneer 2005-2006 (so far). 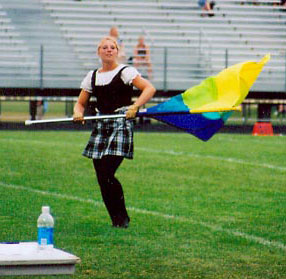 Jalissa Ann Bishop
What's your personal practice schedule like?
I usually work out a little in the morning before school and spin after school in the band room because it's too cold out around here to be practicing outside. What does your ideal free day consist of?
I like seeing new cities. I love traveling and seeing what other places are like compared to where I live. Favorite pig-out food:
Chocolate is good. In the shower you can hear me singing: Anything and everything. The last good book I read:
This is pretty sad, but I'm going to have to go with the Harry Potter book that came out this past summer. The last great film I saw:
"Anchorman" Jobs I have/have had:
Right now I'm a waitress. For the winter, I'm also a snowboard instructor on the weekends. I used to do clerical entry accounting for a business during summers, but I'm not doing that anymore. My favorite TV show:
I usually don't have much time to watch TV, but I love watching reruns of "Seinfeld." What has been your formative drum corps moment?
Finals last year, because it was amazing stepping onto the field knowing that everything we had worked for all summer was put into those 10 minutes. What would you be doing next summer if you were not marching?
Wishing I was marching. Hanging out with friends and probably working a lot. I would go to as many shows as I could of course. How did you decide to be a member of your corps?
One day I decided that I wanted to march out of nowhere. I called my dad to ask if any corps were in the area. He said that Pioneer was. Two weeks later I was at Pioneer's November camp. What first attracted you to the drum corps activity?
I really liked marching, but my high school band isn't that into marching. Drum corps was appealing because I would be marching with other people who care about marching, and I would be able to travel a lot. What advice would you give to young people who want to march?
Do it. If you can only do it for one season it's more than worth it. What I want to be when I "grow up":
More than likely I'm going to be an accountant, but I would really like to be a senator. Favorite drum corps personality and why:
Roman Blenski and his wife Sue do so much for our corps. I don't think that even all of our members realize how much work bingo is and they do it three, sometimes four times a week to help finance Pioneer. They have been doing this for so many years, giving thousands of young adults the chance to compete in this activity. Best drum corps show ever and why:
Santa Clara Vanguard 1989. Their show was amazing, and everyone on the field showed great emotion during it. The year is 2030. What does a DCI show look like?
I don't think that it will be all that different from now. The sport has come so far in a short amount of time that I'm not sure there are that many new elements that can be added to shows to make them better.