Name, age, hometown: Jessica Gonzalez, 18, Sacramento, Calif. What corps are you in and what is your role this summer? Mandarins, color guard Give us your full drum corps/marching music background. I marched guard at my high school my sophomore, junior and senior years. The majority of my experience though has come from Mandarins. This summer will be my fourth consecutive year doing drum corps and marching with Mandarins color guard. 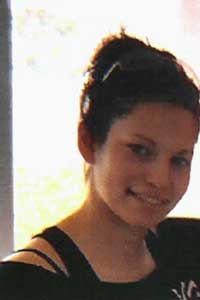 Jessica Gonzalez
How did you decide to be a member of your corps? I decided to be a member when I went with another guard girl, who was already in Mandarins, to watch the horn line and drum line practice in November of '01 for the first time. Something about the way they were practicing, the sound they were producing, and the overall mood of that dark cold night just enveloped me. I've been caught up with them ever since. What first attracted you to the drum corps activity? I never knew about drum corps until my guard captain at my high school said I should check it out. She was the one who I went that first night with. I hadn't ever seen or heard anything like drum corps. In fact, I didn't even know color guard existed until my sophomore year of high school. When I joined Mandarins for '02 season I had only been spinning for three months. What advice would you give to young people who want to march? Do it. Do it now. As soon as it is feasibly possible. It's another world. It's a once-in-a-lifetime chance to be surrounded by so many different people who are all working for the same goal. You will make connections with people that you will never forget and always learn from. Do you have any favorite road anecdotes? Well, there was the time I slipped and fell in the shower my rookie year -- that was pretty embarrassing but hilarious at the same time. I will never forget in '03 in Florida what the field was like where we stayed. It had rained, of course, and the field turned into a swamp. Literally there was a foot of water, if not more, covering our entire field. And of course the guard drill consisted of lying down in the middle of the field to make an "M." Oh yeah, did I mention the red ant hills all over the field too? We found that out pretty quickly after we lied down. Afterwards I had bites on my stomach and ankles, my shoes were turned into water shoes, my clothes were completely soaked and sticking to my body, and there was grass in places I won't mention. We had fun with it, though, and it was worth it. Its one of those things that you can look back on and laugh at. The last good book I read: "The Celestine Prophecy" by James Redfield The last great film I saw: I'm not much of a movie-goer, but
"Flying Daggers" was the most-recent movie I've seen. I watched it more for the cinematography than the actual plot. Where I go to school and what I'm studying: This was my first year at Sacramento City Jr. College. As of now I'm studying to obtain my A.S. and also to become a nurse. Jobs I have/have had: I've taught guard for a little less than a year, but otherwise I am a full-time student. Three CDs I'd want on a deserted island: Does an iPod count? That would be hard since there are so many different songs, not necessarily CDs, I like but here you go: 1. Michael Jackson, "Number Ones"
2. Evanescence, "Fallen"
3. You know what, the Ciara featuring Ludacris song (which I cant remember the name of, "Oh" or "Ridin' Slow," something like that). I guess it's on Ciara's CD. It's between that and Christina Aguilera's "Stripped" CD. My favorite TV show: I don't really have time anymore to watch a lot of TV, but If I do I try to look for some type of comedy. Favorite performers: My favorite performer is anyone who has a passion for what they do. How do you "blow off steam?": Drawing is one of my outlets. I draw mostly faces either realistically or abstract, depends on my mood, and I like to use charcoal. Dancing is another way I can release frustration. Sometimes I'll just need to listen to some music. What has been your formative drum corps moment: I've had a few instances where I felt like I had been hit in the face with realization. I've made so many connections in the last three years I don't even know where to begin. Knowing even just one person feels the exact same emotion as you at the exact same moment on the field is satisfying. Realizing everyone is connected, that everyone is there by choice, that there is at least one thing every member can teach you and knowing you are sharing your passion with so many people makes you very appreciative of just life in general. Best drum corps show ever: I wouldn't be able to choose just one. It would be like trying to choose one favorite day of the year. The only show that sticks out in my mind is the Cavaliers my Rookie year, but it was more of me just feeling overwhelmed at seeing drum corps for the first time. What are you most looking forward to about the summer? Performing. Without a doubt. Connecting with and meeting new people. Sleeping on the bus. Best thing about being in a drum corps: Being able to travel, seeing how far you can push your body mentally and physically, never feeling lonely, not having to go to summer school, and definitely showers! Worst thing about being in a drum corps: Waking up stiff, just waking up period sometimes. Big bugs can kind of be annoying too, like red ants on the field. The worst feeling you get is when you have disappointed someone.

Favorite drum corps personality and why: Color guard instructors at Mandarins for asking of me my personal best and helping me shape who I am to this day. In fact, all of the Mandarins staff and parents that have helped out have become a second family to me, and I thank them for giving me this opportunity to express and find myself. What I want to be when I "grow up": If I could, I would pursue dancing, since performing is my passion, but as of right now I'm going to be a nurse. Really any job that isn't repetitive and includes interacting with people will satisfy me. Describe what you think a typical DCI show will look in 2015: Wow, 2015 is really not that far away if you think about it. Maybe video projections on the field will become giant backdrops or "floors." Or maybe new electronic and lighter horns and drums will be invented. Possibly the pit instruments might be made mobile and light enough to even easily be carried around the field. Drill might even take on a 3-D quality, with performers climbing on one another forming pyramids and such. Who knows, I guess we will have to wait and see.