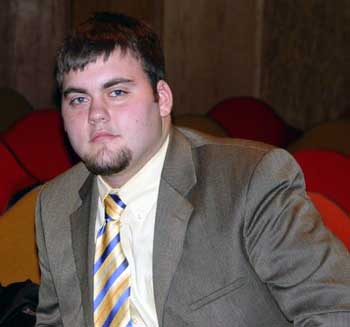 John Minor
I have also marched for three seasons in the Northern Illinois University Huskie marching band, first as a cymbal player, then as a tenor drummer, and this past season I played baritone. How did you decide to be a member of your corps? On a musical level, the Madison Scouts were the first drum corps I was exposed to. Somehow I heard an audio recording of the Scouts' 1998 show: "Power, Pizzaz, and all that Jazz" and I was hooked. To date that is still my favorite drum corps show of all time. On a personal level, I have only ever heard and seen good things about the Scouts. Scouts that I met before I decided to audition for the corps have all had something in common. I can't quite put my finger on it, but they were some of the nicest and most welcoming people I have ever met, and that is both before and after I joined the corps. What first attracted you to the drum corps activity? The excitement, no doubt about it. Just watching a show got my blood pumping and gave me chills. I decided that I wanted to do that, to make other people's blood pump and to give them chills. What advice would you give to young people who want to march? Do it, and start young. I've known people to march in DCI for up to nine years, and I feel sad that I have only gotten three. If you think you're not good enough, you may be right, but you just as well could be wrong. You never know until you go to a camp and try it out, so do it! Do you have any favorite road anecdotes? The one that makes me laugh every time I think about it is from last summer while I was with the Colts and I was thrown off the pit cart at our rehearsal site in Orlando, Fla. I was riding on the side with the chimes, making sure they didn't fall off, when our instructor took a turn that was just sharp and fast enough to make me lose my balance and fall off and do a sliding belly flop on the asphalt, with no shirt on. I wasn't badly hurt at all, just a scraped knee, scraped elbow, little stuff like that. The funny part was that at the time I was wearing Mickey Mouse ears that my girlfriend got me for my birthday the previous March, and I took them on tour just to wear in Orlando for a laugh during rehearsal. The other funny part was that they didn't fall off when I hit the ground.

The last good book I read: I am currently reading "The Great Gatsby" by F. Scott Fitzgerald The last great film I saw: I just saw "Hostage" in the theatre, that movie was really good. Where I go to school and what I'm studying: I go to school at Northern Illinois University and I'm studying music education. Jobs I have/have had: I don't have a job right now, but I've had some interesting ones, including detassling corn, working at Boston Market, and selling Cutco cutlery. Three CDs I'd want on a deserted island: 1. Madison Scouts, "Through the Years Part 3"
2. The Amoco Renegades, "A Panorama Saga, Tribute to Jit Samaroo" (I'm a big fan of steel band music from Trinidad)
3. Five Iron Frenzy, "Live, Proof that the Youth are Revolting" My favorite TV show: I'm quite fond of "Stargate SG-1" Favorite performers: Bob Becker, Orlando Cotto How do you "blow off steam?" Play some loud angry rock music on my drumset, or just sit with some friends in a local diner called "The Junction" and drink coffee and speak our minds. Best drum corps show ever: Madison Scouts 1998: "Power, Pizzaz, and all that Jazz" What are you most looking forward to about the summer? No girls for three months! Haha, no, actually, I'm looking forward to being a part of the presence of the Madison Scouts and giving the audience a show that will blow them away. Best thing about being in a drum corps: Getting really close with a group of people. Some of my closest friends are the ones I've marched with, even though they live two states away. Worst thing about being in a drum corps: The lack of free time, but you get used to it. During tour, the best part of the day is: Performing, hearing the crowd go nuts, and suddenly all your hard work is worth it. During tour, the worst part of the day is: Getting up. When the drum major calls you to wake up, staying put on a gym floor in a sleeping bag has never sounded so good. Favorite drum corps personality and why: Our director, Sal Salas. He's funny a lot, but he also makes sure we get stuff done and that we are becoming a brotherhood. What I want to be when I "grow up": A high school band director. Describe what you think a typical DCI show will look in 2015. I really have no idea. Hopefully a lot like they do now, but your guess is as good as mine. I'm going to worry about 2005 before I worry about 2015, though.