Name, age, hometown: Jonathan Severance, 20, Denton, Texas. What corps are you in and what is your role this summer? Blue Stars, front line section leader. Where I go to school and what I'm studying: Century College, marketing. Give us your full drum corps/marching music background. Haha, well I was born on finals night 1985 when Cadets won. I've been going to shows since I can remember. Both of my parents and a couple uncles marched with the Blue Stars from '74 to '89. I came to Blue Stars camps in the fall of '99. It was a very positive experience and some how at the age of 14 made a vibe spot they had open. I've been with the Blue Stars since, with the exception of 2002. I thought I could stay home and make money, that didn't prove to be as effective as I'd hoped so I came back in 2003. 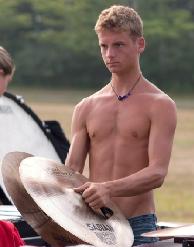 Jonathan Severance
What's your personal practice schedule like? With going to school and working full-time at Radio Shack, I only find a couple hrs a week to sneak in some practice. I try to make the most out of my time since I don't have a lot to work with. What does your ideal free day consist of? Chicago in the past has been my favorite free day spot. I would love to get off the bus in the morning to have the whole day to just take in the life outside of drum corps. Hit up some famous places to eat, act a little crazy, and be able to hang out until late evening. Favorite pig-out food: Swedish fish and Sour Patch Kids. In the shower you can hear me singing: I try to do rap songs, but how I think a lounge singer might translate them. People usually get a nice laugh out of that. The last good book I read: "The Mastery of Love" The last great film I saw: Gosh, I haven't been to many movies since I got back from tour (I know, pathetic, right?). Probably "Cinderella Man." Jobs I have/have had: I used to work at Avis/Budget Rent a Car for three years when I wasn't marching. Now I'm currently at Radio Shack in Stillwater, Minn. My favorite TV show: "Family Guy," "Colbert Report," "The Simpsons." What has been your formative drum corps moment? I enjoy small stadiums when we're really close to the crowd and I can hear the people talking about how amazed they are and having the kids come running up to us after the shows and ask for us to play the "really fast part with the sticks." Haha. Then at finals seeing my whole family in the stands getting rowdy with cowbells and giant star cut-outs. What would you be doing next summer if you were not marching? Ooof, I can't even imagine. Probably driving a bus for the corps. I can't have a summer without drum corps. How did you decide to be a member of your corps? My parents had a big part of it. My whole family has been a part of this corps since the early '70s. So it was an honor to continue that tradition, and it has proved to be one of the best decisions I've made, ever. I love this corps like it is part of my family. I can't imagine playing anywhere else. What first attracted you to the drum corps activity? Honestly, snare drummers. They looked so hard-core. I even accidentally learned traditional grip backwards because when I was like 7. I didn't take into consideration that I was watching the drummers from the front and just learned the mirror image of what they were holding, haha. I then started playing keyboard percussion and I wouldn't want to play anything else now. I enjoy being up front so everyone can see what I'm doing at all times. It's a little high I get during each show. What advice would you give to young people who want to march? The first year is rough only from the fact that you are away from your family all summer with a bunch of older kids who know what they're doing. Otherwise just have an open mind to what you learn and to peoples' opinions that you meet in corps. You will mature faster than thought possible by participating in corps. I would recommend doing corps as soon as possible, if it's with the right corps. Make sure you're completely comfortable with the people you're gonna spend the whole summer with. What I want to be when I "grow up": A good father/provider. Favorite drum corps personality and why: Michael Cesario because he really "swashes my buckle." Best drum corps show ever and why: The first show that opened my eyes to really wanting to do corps is Madison '97. I wish I could've done that show. It was the most fun I can remember watching a show. The year is 2030. What does a DCI show look like? Eh, Rollerblades, elephants, laser lights, "Guest Artists" like a reincarnated Cher, solar panel-powered amps so "there aren't any cords," and a classic painting auction going on in the middle of the field. It'll be "The Greatest Show on Earth" -- look out Barnum and Bailey, haha. No I really have no idea what DCI will look like. I'll just be in the stands for what ever comes my way. Feel free to add anything else you'd like. Blue Stars 2006 -- look out!