Name, age, hometown: Julia "Jewel" McCune, La Crescent, Minn./La Crosse, Wis. (They're only five minutes apart.) What corps are you in and what is your role this summer? I am a member of the Blue Stars' color guard. I spin flag. Where I go to school and what I'm studying: I'm currently attending La Crescent High School and will graduate in June, but I will attend Western Michigan University this fall and double major in Spanish and hopefully musical theatre. Give us your full drum corps/marching music background. I came to Blue Stars at the age of 14 in Nov. of 2002. I wanted to join on a whim in June of 2002, but my parents wouldn't let me and it was a little too spontaneous for them. After begging and pleading my parents to let me go to a camp, I went to the Blue Stars 2002 Nov. camp and every camp afterward, marching my rookie year the summer of 2003 and stepping off the field with a gold medal. We were the Division III champions that year. My first year was truly a struggle. I didn't know anything, didn't know how to march or spin anything besides drop spins, really. I was definitely the corps's "tick box," but in the end, it has all been worth it. I still march with the Blue Stars today and would not trade any of my summers for anything in the world. I taught Onalaska High School's color guard in 2004 and taught La Crescent High School's color guard this past season as a volunteer. We used Blue Stars' flags and got some new, weighted aluminum poles, too! I can definitely say that teaching helps me understand my instructors and what they go through every day with us. It's an amazing and worthwhile experience, though! 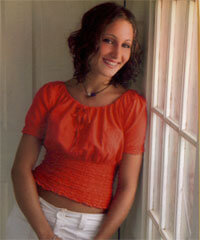 Julia McCune
What's your personal practice schedule like? It's my senior year. It's very hard to find time to practice, but I do what I can. I've been lazy throughout Jan. and Feb., but every morning I try to do some crunches or Pilates, triceps push-ups and regular push-ups when I'm feeling good. I am supposed to be taking dance classes--tap on Tuesdays and Thursdays, ballet and jazz on Wednesdays, and modern on Thursdays--but with the musical I'm in now, that's been pretty hard to follow. I try to get together with two of my friends at UW-La Crosse, Travis, another fellow Blue Star who is a rookie this year, and David, a member of Colts' guard and weapon line. I'm so lucky to have people to practice with! What does your ideal free day consist of? A full free day of waking up to just do nothing! Maybe a day in Chicago. I loved the Chicago free days we've had the past two years! And there always has to be ice cream somewhere, because I work at Cold Stone and now I'm obsessed. Favorite pig-out food: Ice cream. No doubt about it. On the bus, maybe chocolate chip Teddy Grahams or something healthy that I won't feel guilty about pigging out on. In the shower you can hear me singing: Anything and everything! I'll belt Broadway tunes or sing our show obnoxiously. Did you know that singing in the shower is good for your voice because of the steam's effects on your vocal chords? So many benefits of singing in the shower! The last good book I read: "Les Miserables," but it was the abridged version, unfortunately. "Les Mis" was the first book to actually make me cry at the end. It was seriously the best book I've ever read, and that was only the abridged version! The last great film I saw: I know people will disagree with me, but "Rent." "Rent" made me cry, too. I've heard the Broadway version is worlds better, but for those of us who don't have the cash to do Broadway like me, the movie is the next best thing. Jobs I have/have had: I just resigned from my temporary job at the movie theater, I absolutely hated it. I've been working at Cold Stone Creamery since last April, and it's the best job I've ever had. It was nice having corps friends stop in the day before move-in to visit me on my last day of work last summer! I did manage to get some people cheap ice cream on a free day we had in La Crosse last summer, too.    My favorite TV show: "Will and Grace" or "Mad TV," but honestly, I don't watch TV much. No time. What would you be doing next summer if you were not marching? Being in a musical, doing a dance intensive, interning or teaching, or spending every day whining that I'm not marching and telling myself how stupid I am for not marching. I plan on heeding everyone else's warnings about taking a year off. I know I'll regret it, so I don't plan on taking a year off. How did you decide to be a member of your corps? I wanted to be better at high school color guard. I was a slow learner and wanted to be better, that's all. A friend of mine told me about his experience at Kiwanis Kavaliers and strongly urged me to march drum corps the next summer. He convinced me. I went to DCI.org, found the closest drum corps, and it turned out to be Blue Stars, which was literally five minutes from my house! Now I have fallen in love with drum corps.    I am one of the luckiest people I know. Some people have to drive anywhere from three to eight hours for an audition, or even fly halfway across the country. I just had to drive right across what we call the "Big Blue Bridge" in La Crosse, and I was there for my first audition camp. What first attracted you to the drum corps activity? Well, what my friend told me about his experiences and watching a clip of Santa Clara Vanguard's 2001 show on DCI.org. I thought it was so amazing how fast everyone moved and how clean the color guard was, the way they tossed, danced, the drill, everything. I would show that clip to my parents to get them to let me march. What advice would you give to young people who want to march? Take advantage of this amazing experience; it will change your life. And when you do take advantage of it, don't ever take it for granted. If you start young like I did, sometimes you may take it for granted, but I bet when you look back on those summers after you age out, you'll still wish you could do it again. You will meet some of the most amazing people in your life, mature as a person, and become a better player and performer in one summer than you could in a few years. Don't wait until you're 18 if you can help it, because by the time you're 21, you'll be wishing you had just one more year.
What I want to be when I "grow up": A professional actor--a triple threat. I figure I'll teach winter guard and drum corps on the side of that, and since I'll be performing professionally, I will always have a soft spot for drum corps and color guard. Favorite drum corps personality and why: I really like the articles Michael Boo writes. Oh, and Peggy Twiggs for sure. Who would have thought her spin would become a revolution in color guard as we know it? Almost every color guard does "peggy spins," I think!

Best drum corps show ever and why: I honestly don't think I can say that there is a best drum corps show ever, just shows that people strongly admire. I will say that Phantom Regiment 2003 has a special place in my heart. I still get chills just listening to it. I loved the music, the guard, the drill, the progression of the show in general. I think part of it has to do with the fact that 2003 was my rookie year, but even now, I still love the show. Actually, I think I love it more now than I did in 2003! The year is 2030. What does a DCI show look like? Who knows! I bet color guard will be even more dance-oriented than it is now. Maybe part of the pit will go back to marching again, or the drum line will expand and have auxiliary percussion march. Horn lines will have more innovative visual movements and maybe lighting will become a new concept to drum corps shows. Since sound already has, maybe corps will utilize stadium lighting or something.

Add anything else you would like.I am so excited to begin the 2006 season. First, because I'm graduating high school this year. Second, because we're making the transition back to Division I. Third, because finals are in Madison, Wis., three hours from my house! This will be the first out of four years that I will have marched that my parents and maybe other relatives will be able to go to DCI Finals! Good luck to all the corps coming out this year, Div I, II, and III alike, and don't take a second of your summer for granted!