Justin Ashton, 2004 drum sergeant with the Madison Scouts, has been with that corps since 2001. "I attended Eagan High School (in Eagan, Minn.) and was part of the drum line for five years. There I was the section leader, which taught me many basic skills of being a good leader," Ashton said. After initially being cut from Madison in 2000, Ashton marched with the Minnesota Brass Inc. senior corps. "My drum line instructor at Eagan, and mentor, Joel Matuzak, was and still is the caption head of Brass, and gave me the opportunity to march in the tenor line," Ashton said. 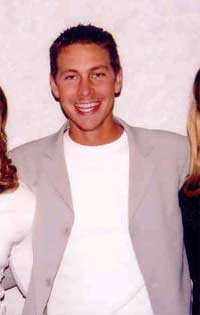 Justin Ashton
"Marching in a senior corps has definitely been one of the best experiences I have had. It gave me a great look at what drum corps really was about, and it taught me what it was like to work with very different people of all ages," Ashton said of his time with Minnesota Brass. ^Ashton credits drum corps as well as his instructors for molding him onto the person he is. "I have had great instructors and owe them my gratitude for making me the person and leader I am today. Being a Madison Scout and being involved in drum corps, I have learned that I am not an individual anymore. The group/drum line/corps takes priority over what I individually want. "Being the drum sergeant, I have learned what leadership really is. I am constantly being watched and need to lead by example. Marching with Madison for four years has given me a great perspective and the skills needed for all walks of life," Ashton said. Where do you go to school, and what extracurricular activities are you involved with there? I attend college at the University of Minnesota-Minneapolis where I am pursuing a degree in marketing and applied economics. I also instruct the Irondale High School winter drum line, and work at Nordstrom in the Mall of America. I am a very busy person, but if I wasn't, then my life would be boring! The last good book I read: "The Inner Game of Tennis," by W. Timothy Gallewey. This book really has very little to do with tennis, but more about the mentality for success when dealing with challenges in life. Great book to read while on tour!

The last great film I saw: "Seven." I just watched this film for the first time recently and it will seriously drive a person crazy because it is so messed up. But it was very good! Three CDs I'd want on a deserted island: 311 -- "311," "The Madison Scouts Through The Years -- Part 2, 1992 – 1997," Incubus, "Morning View." My favorite TV show: "Las Vegas" Favorite performers:Dave Weckl (drum set god), Carter Beauford (drum set player for Dave Matthews Band), Pat Fitz-Gibbon (DCI snare drum champion), along with Morgan Freeman (actor), Halle Berry (actress) and Robin Williams (actor). How do you "blow off steam?" During the summer the best time for me to blow off steam is at night. Finding a tree or an open field always cools me down. I just lie there and stare at the stars in the sky. There is always bus time, where you can talk about anything with the other guys around you and they know exactly what you are feeling. However, once you hit the field, it's all business. Was it always your goal to be drum sergeant? Being a tenor player and being a drum sergeant is usually not commo,n so I never thought that I would be given the opportunity. I always knew that no matter where I was in the line, I would become a leader. I tend to not take advantage of my position and do what I have always done in the past, which is lead by example. How will you go about balancing the roles of leader and corpsmate? There is definitely a fine line that must be drawn between balancing my roles as a leader and interacting with my other brothers in the corps. Being the drum sergeant, I need to be doing the right things, at the right times, all the time. If one of my brothers in the corps is screwing up, I am going to do what's necessary to help him. If that means different types of motivation, so be it. However, in the end, the guys in the corps know what the expectations are, and being a brother on and off the field is what a Madison Scout is. What has been your formative drum corps moment? In 1997, a bunch of friends of mine rented a Winnebago and we headed to Whitewater, Wis., for the DCI Preview of Champions. This two days of non-stop drum corps opened my eyes to what this activity really was. I remember sitting up in the stands watching all the different corps take the
field, some of which I was unfamiliar with. I sat there thinking that, "Someday, I will be doing this." I look back to that experience and now think to myself that I am performing, practicing and playing Frisbee during the summer on that same field in Whitewater. I keep the experience of what I was feeling when the corps performed on my mind all the time. I also imagine that little kid up in the stands that is experiencing the same thing I did in 1997 when I perform each night. Best drum corps show ever: There have been way to many! If I had to choose one it would be the Madison Scouts 1996 show – "Drum Corps Fan's Dream, Part Dos." Can you ask for anything better? This show was 100 percent pound-driving entertainment, and that's what drum corps should be! What are you most looking forward to about the summer? I am looking forward to the Tour of Champions after finals week. Being able to spend the last week of tour hanging out with other corps, drumming with the other guys/gals in other corps, and being able to go out to Californoa again to perform in front of those crazy fans. Best thing about being drum sergeant: Being in charge, having the power to say yes or no, and being followed by a lot of talented guys in the drum line.

Worst thing about being drum sergeant: Knowing that I have to be right 100 percent of the time, and if I'm not, then I am doing something wrong.

During tour, the best part of the day is: Performing, after shows, and bus time! During tour, the worst part of the day is: Basics Favorite drum corps personality and why: Jessica Allen. Ya know, the Blue Devils guard captain-turned DCI broadcast anchor? Need I say more? What do you want to be when your drum corps career is over? I plan on graduating next December with a degree in marketing and applied economics. I would really like to stay involved with the activity down the road, and I would also like to march in an indoor drum line next winter.