Name, age, hometown: Katie Peak, 20, Milwaukee What corps are you in and what is your role this summer? I am in the Colts as the mellophone section leader. Give us your full drum corps/marching music background. I marched piccolo my freshman year of high school and learned mellophone for the rest of high school. I loved it so much that I auditioned for the Colts and began my first of four years in 2003. I also marched one year at Central Michigan University. 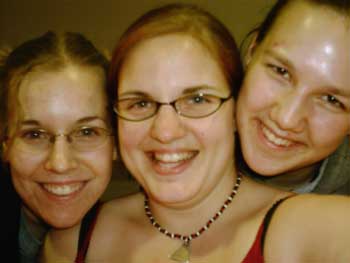 Lauren Gartner, Katie Peak, Katie Maus, all of the Colts mellophone section.
How did you decide to be a member of your corps? I had always heard good things about the corps and the respect that they get from members of other corps. I decided to audition to see what it was like, and I immediately fell in love with the people, the staff and the organization. What first attracted you to the drum corps activity? I went to my first show with some of my friends when I was in high school. I had never even heard of drum corps, but after I watched the first few corps I looked at my friends and told them that I was going to do that someday. They all laughed at me because I'm originally a flute player. What advice would you give to young people who want to march? Get involved early! I know too many people (myself included) who wish they would have started a few years before they did so they could have more experiences. In the words of Greg Orwoll, the first half of auditioning for a corps is actually going to an audition. Do you have any favorite road anecdotes? Right before tour in 2003 I went to get a short haircut for the summer. I ended up with something I didn't really like, but it was too short at that point to fix. So halfway through the summer my friend Kayla and I went walking around this small town during a laundry stop. We found about four or five places to get a haircut but we couldn't figure out why all of them were closed. It took us until almost the end of our laundry day to realize that it was Sunday and that's why they were all closed. It always amazes me on tour how much I don't know what's going on in real life. The last good book I read: "Armchair Economist: Economics and Everyday Experience" by Steven Landsburg (I know, I'm a huge geek ...) The last great film I saw: "The Wedding Date" (I love chick flicks!) Where I go to school and what I'm studying: I go to Central Michigan University and I'm an economics major with a music minor. Jobs I have/have had: My senior year of high school I had a full-time internship with Hal Leonard Music Publishing as an engraver. It was a great experience learning about music as well as learning how to work in a professional environment. Now I work in the music resource center at Central Michigan University as a student assistant. Three CDs I'd want on a deserted island: Anything by Dixie Chicks, Duncan Sheik or Maroon 5 My favorite TV show: I'm addicted to "Alias"! How do you "blow off steam?" I crochet. I made my bus blanket for last year in Colts colors. Right now I'm currently working on a bus blanket for my friend Billy who marches with the Cavaliers, as well as a really large blanket for my apartment for next year. What has been your formative drum corps moment? I can remember walking off the field after my last show in 2003. All I could think about was how amazing it felt to work so hard and accomplish what we did. I was so proud to be a Colt at that moment. Best drum corps show ever: I can't pick just one! What are you most looking forward to about the summer? I'm excited to be in a leadership position this summer. It will be a great new addition to my drum corps experience. I have a great section and I'm excited to march with all of the new mellos this year. Best thing about being in a drum corps: Joining a drum corps is like instantly joining a family. You grow so close to the people you march with and spend the rest of the off season on the phone or Internet, or trying to organize small get-togethers. Worst thing about being in a drum corps: Not having a summer income. I'll be a junior in college without a car! During tour, the best part of the day is: Waking up at 7 a.m. Just kidding! I love putting on my uniform before a show at night. It makes me feel so strong and powerful. During tour, the worst part of the day is: Who thought that running block right after eating lunch was a good idea? What I want to be when I "grow up": I would love to get into international trade. Maybe an international company that doesn't need me during the summers so I can stay involved with corps? Describe what you think a typical DCI show will look in 2015. Hopefully things will not change too much in the next 10 years. I know that corps have been trying to come up with new, creative show ideas. I'm still waiting for a show called "The Best of the Dixie Chicks"! Feel free to add anything else you'd like. To those marching this season: Good luck and work hard! To those not marching this season: Don't forget to go and cheer for everyone involved.