Name, age, hometown: Kimi Fong, 21, Sacramento, Calif. What corps are you in and what is your role this summer?
Mandarins color guard. Where I go to school and what I'm studying: I'm an art major at University of California Santa Cruz. Give us your full drum corps/marching music background. I started out playing clarinet in my high school's marching band. Then I switched to tuba, and then I finally switched to guard. I started marching with the Mandarins in 2002, making this my fifth season. 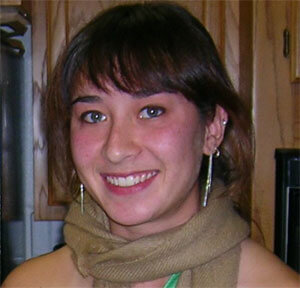 Kimi Fong
What's your practice schedule like? Sleep, eat, practice, snack, practice, snack, practice more, snack more—you get the idea. What does your ideal free day consist of? Wearing sandals and non-practice clothing, eating in restaurants and seeing sights. I'm pretty much up for anything and usually happy with the results as long as I'm wearing flip-flops. Favorite pig-out food: Fruit snacks, otter pops, ice cream, candy and pop-tarts. In the shower you can hear me singing: This past season there were quite a few "Moulin Rouge" tunes. The last good book I read: "Days of War Nights of Love" The last great film I saw: "Memoirs of a Geisha" My favorite TV show: "CSI: Las Vegas" What has been your formative drum corps moment? Originally, it would have to be finals night of my rookie year. That was my first drum corps finals experience, so there was a lot of adrenaline and emotions that night. More recently, the moments during the December/January camps when I realized that this really is my ageout season were pretty epic. What would you be doing next summer if you were not marching? I honestly have no idea. I have trouble imagining what I am going to be doing next month, let alone almost a year from now. But, with any luck I will win the lottery, buy a new car, visit the Guggenheim Museum in New York and take a cruise around the world. What first attracted you to the drum corps activity? The people. Each member of the corps and the staff has such a passion and drive for what they were doing, and that is contagious. What advice would you give to young people who want to march? If it is something that you really want, find a way to make it work. But if you are going do it, then just do it! Don't just make some wimpy attempt. Go big or go home, and don't forget sunscreen. What I want to be when I "grow up": I like to travel, and I have big plans to see the world so I would have to go with space cowboy or pirate. If those don't work out, I'll go with plan B—to become a gypsy and have a wolf as my sidekick. Favorite drum corps personality and why: Vic Firth. The fact that he sponsors so many groups and gives them free things is pretty amazing, and even though I don't personally receive T-shirts or drum sticks from him, the idea of getting free things is very appealing. Best drum corps show ever and why: Cavaliers 2002. I really have no words to describe how awesome it was. Feel free to add anything else you'd like. "Make no little plans" –Daniel H. Burnham, U.S. architect and city-planner. I saw this on a T-shirt once and thought it was amazing.