Now that some drum corps rosters are close to getting set, we're going to start profiling members of individual corps on DCI.org. Lauren McCawley began her drum corps career in 2001 as a bass drum player in Southwind. Before that, "I began marching at Oakland High School in Murfreesboro, Tenn. I played an unspecified woodwind instrument. I went to the Murfreesboro show and was the 'water girl' for 1999 and 2000. There I realized that I needed to learn to play something different if I was ever to be down on that field. In 2000 a winter drum line program began at my school and I picked up mallet percussion instrument. Fast forward a year and I filled a bass drum spot at Southwind and have been there ever since!" McCawley said. 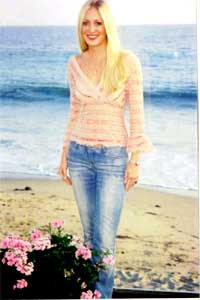 Lauren McCawley, on the beach in Malibu.
McCawley said that being a section leader in the Oakland High School band helped her develop skills that would come in handy later with Southwind. "Having the opportunity to lead my unspecified woodwind section for a few years in high school opened my eyes to what approaches work well with different groups of people. Right now at Pepperdine University in Malibu, Calif., my persuasion class actually is helping me really bring all my ideas together," McCawley said. McCawley is heavily involved in many activities at Pepperdine. "I play in several musical ensembles like the symphony and other chamber groups. I also do work with TV26, our television station here at the university, and volunteer for Into the Streets (a program that feeds the homeless). "Aside from that I try to balance a few part-time jobs, take more class units than should be legal, have fun with Kappa Kappa Gamma, and cheer for the basketball team (go Waves!) We are currently preparing for our college regional cheerleading competition in Las Vegas during the last weekend of February," McCawley said. The last good book I read: "Me Talk Pretty One Day," by David Sedaris. Read chapter 9, if you dare. The last great film I saw: This reminds me that I need to go on a date. "Lord of the Rings: The Return of the King" was the last one I saw, and that was before Christmas! Three CDs I'd want on a deserted island: The "Rent" soundtrack, my country mix CD and "Morning View" by Incubus. My favorite TV show: "Sex and the City." I'm beyond addicted. And (it's only on for) a couple more episodes ... so sad. Favorite performers: Coldplay, John Mayer, Incubus and the Red Hot Chili Peppers all play incredible live shows. How do you "blow off steam"? Drive up the coast or lounge on my balcony and watch the waves with a beverage in hand. Was it always your goal to be drum major? Not at all. I once thought it was the last position I would ever want. There is so much responsibility. I just enjoyed playing with Southwind and trying to lead by example. We are always taught to do the right thing. This year I realized I was at a point in my life where serving as drum major for my final year is the right thing to do. How will you go about balancing the roles of leader and corpsmate? My friends are one of the primary reasons I love Southwind so much. I think that over the past three seasons, mutual trust and respect has been earned between myself and the members, so that the transition should be an easy one. As long as we all do our part, think smart, and know when it is time to get down to business, it will be such a great summer. What has been your favorite drum corps moment? Well, I am not sure if this is an appropriate place to put this, but it involves a semi truck, an all male horn arc, a dropped gauntlet, and the craziness that followed. Best drum corps show ever:Madison Scouts, 1995 What are you most looking forward to about the summer? Being the first drum major to conduct Southwind's corps song. Best thing about being drum major: Having the best seat on the house while conducting your corps. Worst thing about being drum major: Realizing how much responsibility I really have. During tour, the best part of the day is: When the announcer says "Southwind, you may take the field in drum corps competition!" During tour, the worst part of the day is: That last hour before lunch. Man do I get hungry! Favorite drum corps personality: My seat partner from last year. What do you want to be when your drum corps career is over? Still be involved in television production in Los Angeles or London.