Name, age, hometown: Name, age, hometown: Liam Lynch, 20, Waterloo, Ont., Canada, but I live in Tampa, Fla. What corps are you in and what is your role this summer? Kiwanis
Kavaliers -- I am the lead mellophone player, probably returning as horn sergeant. Where I go to school and what I'm studying: I attend the University of South Florida, and I did my audition yesterday to try and get into the school of music to be a music ed major, but right now I am undeclared. 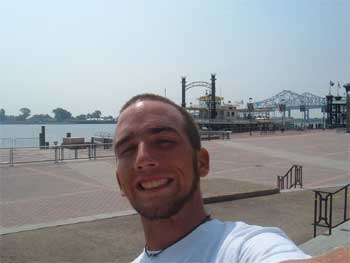 Liam Lynch
Give us your full drum corps/marching music background. This will be my fourth season with the Kiwanis Kavaliers: First two on trumpet and the next two on mellophone. Before corps I marched three years at Countryside High in Clearwater, Fla. What does your ideal free day consist of? My ideal free day is wake up, get off the bus and spend a great day with my friends. Unfortunately I have to make sure my buddies get back to the bus on time. Favorite pig-out food: Chicken wings. In the shower you can hear me singing: Nothing, I am an "In, do your stuff, and out" kind of guy. The last good book I read: "Harry potter and The Half Blood Prince" by J.K. Rowling. The last great film I saw: "Harry Potter and The Goblet of Fire" Jobs I have/have had: Busser at Lee Roy Selmon's Restaurant, and visual tech for Countryside High School's Golden Marching Band of Pride. My favorite TV show: Na Na Na Na "Family Guy" What has been your formative drum corps moment? Seeing my grandpa for the last time at our home show in Kitchener in 2003. Unfortunately he died just before the 2004 season. What would you be doing next summer if you were not marching? Working to save up some money for a new car. How did you decide to be a member of your corps? After I got cut from another corps, my dad found this corps from Kitchener that had camps in Florida, so after a few days I said sure, and never looked back. What first attracted you to the drum corps activity? My section leader in high school my junior year would come back and tell his tour stories, and I really wanted to march, but I waited until my senior year to try. What advice would you give to young people who want to march? Start early! You can only do it for so long. It will only make you better as a person, a worker and a player. What I want to be when I "grow up": A band director, preferably up north, but I might not be able too. Favorite drum corps personality and why: Dennis Loarenza, he knows how to have fun when it's time to have fun and work hard when it is time to work. Best drum corps show ever and why: Santa Clara 1989. Whenever I watch that show I still get chills. The year is 2030. What does a DCI show look like? Robots, tons and tons of robots, which are controlled by people hooked up in a suit in their house. No, I don't think that is going to happen. It will definitely look different. With corps pushing the envelope every year, there is no way for it not to look different. Just look at the past 25 years to now. Feel free to add anything else you'd like. I hope everyone has a safe and productive summer.